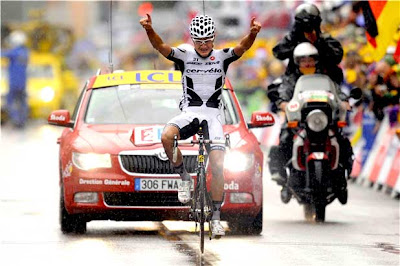 "Geez, we're at the Tour de France, I just didn't want to get
second again like in Sanremo & Flanders!"
...Heinrich Haussler
www.bikeworldnews.com
I was shocked to find out that Julien Dean (Garmin) & Oscar Friere (Rabobank) was shot at with an air gun during today's very wet stage 13!
They're both o.k. but the concern is still there. We'll never know who the cowards are but it's unsettling to think that it can be worse. Dean was shot in the thumb & Friere in the thigh. Both are expected to ride tomorrow. Unheard of in professional cycling races, the Tour is an open arena for fans to watch their cycling heroes. But, there's always the chance for some sort of nefarious activity.
*
Fine win for young gun, Heinrich Haussler (Cervelo) in the cold & wet conditions today. Second stage win for Cervelo as their top classic rider put it all together for the victory. He has reason to smile and be elated thinking back on his earlier season second places in Milan-sanRemo & Tour of Flanders. The weather was right as Haussler cut through the rain while others slogged on. He deserved the victory showing how he has a very bright cycling future ahead of him.
Thor Hushovd (Cervelo) stayed with the yellow jersey (Nocentini) group to gain points to take back the green jersey from Cavendish. A little bit of a spectacle as the God of Thunder let Peter Velits (Milram) know a thing or two on sprinting etiquette as the Slovak beat the Norwegian in the bunch sprint. Hushovd screamed at Velits for taking a crucial point away for the green classification. It's a close battle for the green jersey and can you blame Hushovd?
*
This maybe the best Tour in memory for French riders, as Brice Feillu took third into Vittel. Already a stage seven winner he looks ready to move on to a new team in 2010, as Agritubel looks like it won't be back next season. Feillu is riding aggressively well moving up the standings to third overall in the KOM's competition.
Le Grimpeur Français... 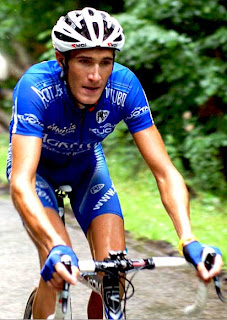