Throwing the hammer down for green! 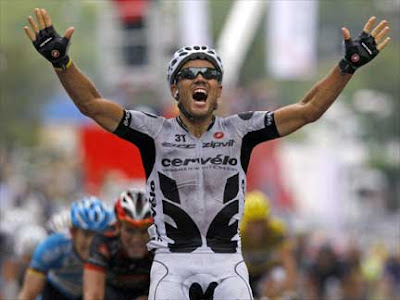 The God of Thunder way!
www.rfi.fr
An exceptional stage six on the rainy roads to Barcelona with so many crashes it can only make a cyclist wince! I for one thought that David Millar's inspirational breakaway with 29 kilometres left made me want him to win. How brilliant it would be for Millar and his need for a win Garmins. At the post race interview, Millar hinted that he was going for a stage win sometime next week. No doubt about his abilities. I was a little surprise at his good form especially after the fine performance at the TTT. His legs came unglued when the pack caught him and suck away his last bit of adrenaline.
With Millar gone, I was on the edge of my couch as Oscar Freire took the lead out and my favorite sprinter, Thor Hushovd (Cervélo TestTeam) swung to his right and overtook him on the climbing finish to Barcelona's Olympic Stadium. What an exciting finish to a highly dramatic day. Cervélo looks good; a first ever stage win & the God of Thunder moving one point closer to attaining the Green jersey. Look out Cavendish. And what better incentive for the team to support Carlos Sastre in the mountains.
Hushovd said it best, "This victory was very important for our team. We're a first year team and we wanted to show people what we could do. The team gave me so much support in the sprints and now I only want to give back to help Carlos now in the mountains. I know I cannot take the last pulls on the climbs, but I will do what I can!"
Well said and the God of Thunder looks closer to wearing the Green jersey!
sprinters Thor Hushovd Tour de France