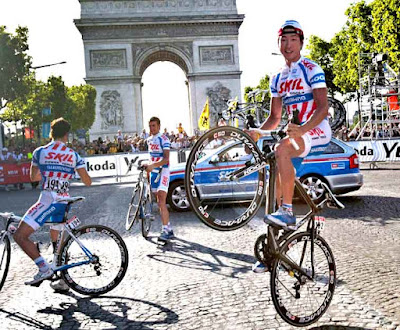 One more time...
Le Tour is over but Fumy Beppu won't leave the show!
www.pezcycling.com
Quick! I need something bad. Like most of you I have Tour withdrawal. I don't know what to do. I find myself looking for any story about the race. I'm re-watching the last few stages I recorded. And I miss it. After some three weeks of two wheel bliss the Tour balloon is deflated. It happened suddenly, like a KO'd boxer. Yet, I feel so brash that I'm turning on OLN and ready to watch more stage highlights. Can the Tour last forever? I feel that it should. However an end is inevitable. I have to accept it...

A. Contador vs L. Armstrong. A huge internal fight within the same team. At the start, they both denied it and played it down. But yet we all knew. Contador said he has no admiration for Armstrong. And the Texan didn't attend the post celebration team dinner. Contador was a worthy winner but he said that his second Tour was the most difficult ...mentally.
The revelation of this Tour has to go to Brit, Bradley Wiggins (Garmin). He dropped enough weight to climb and with his time trialing skills was a force that a podium finish might hold true. He fought to a splendid fourth overall tying fellow compatriot, Robert Millar back in the 1984 Tour. Frenchman, Christophe Le Mevel (Francaise des Jeux) was always near the top finishing in tenth. Nick Roche, son of Stephen, rode well and finish in twenty-third. Italian, Franco Pellizotti (Liguigas) won two classifications: Mountains & Combative. The fiery Italian was close in winning a stage but maintained a fighting spirit throughout this Tour. Thor proved a worthy winner of the Green Jersey with one stage and plenty reason to keep it out of reach of Marky Cavendish (Columbia, sixth stage wins). Canadian, Ryder Hesjedal (Garmin), finished his second tour (49th overall) supporting his teammates and riding well in the team trial becoming the important fifth man. And, lastly rising sons', Fumiyuki Beppu (Skil-Shimano) & Yukiya Arashiro (BBox Bouygues Telecom) can be rightly proud to be the first Japanese riders to finish the Tour.
A excellent Tour and dare I say, without doping scandals. Now, only 364 days to go!
Japanese riders Robert Millar Ryder Hesjedal Thor Hushovd Tour de France