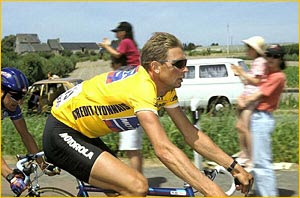 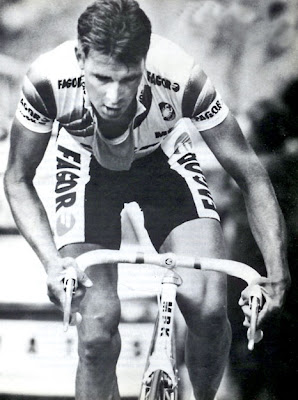 Sean Yates makes it stick on his standard road bike.
He goes on to record the fastest ITT & the first Briton to win one in the Tour!
From: 'Tour 88.' 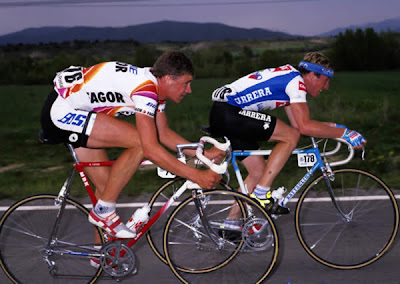 Another Grand Tour success.
The Animal will win stage 12, 1988 Vuelta.
www.cyclingnews.com
Sean Yates was nicknamed, "The Animal," for his hard riding style on the flats and fast descending. You might say he thrashed his bikes. After the 1992 Paris-Nice, his mechanic said that he was really tough on his bikes. A true hard roadman and very underated. It was never truer when he shone in his favorite Classics with many close finishes especially at the 1989 Ghent Wevelgem (2nd) and the 1994 Paris-Roubaix (5th). What he missed in the Classics he turned into big stage wins in the Tour de France & Vuelta a Espana in 1988. Yates produced an epic ride to record the fastest ever ITT in Tour history and became the first Brit to win one, all on a standard road bike. On the Wasquelhal course he was devastating unleashing with brute force an average speed of 49.237 km/h over 52 kms in 1h03'22"!
At the 1994 Tour, the Animal turned it up a notch on the leg busting 270 kilometres flat stage to Rennes. He was very close to winning that killer stage and rode so well to give Britain it's third yellow jersey.
His 15 year career was in the service as a domestique. He knew how to suffer. And, Sean Yates most certainly exemplified that role naturally!
The Animal on his way to yellow!
1994 Tdf, Stage 6.
sprinters video Vintage Tour de France