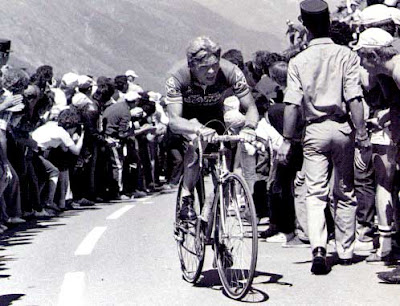 1981.
Winnen pulling away for his first 'Queen!'
Historically, the Dutch have done very well topping the famed L'Alpe-d'Huez. It's both fascinating & menacing with an average gradient of 7.9%, 13 kilometres long, 21 hairpins & elevation of 1860 metres! I'm glad to be a fan. In 1952 the ski station rose to prominence as the great Fausto Coppi soloed to a monumental victory. And surprisingly, it took twenty-four long years to come back.
But, the Dutch soon arrived and have so far taken an astounding eight wins. Interestingly, Holland is a flat nation and doesn't have anything like this. Even the Dutch fans have taken the mountain to heart when their heroes, Hennie Kuiper and Joop Zoetemelk battled it out in 1976. An estimated 300,000 fans lined the fabled mountain and one in three were said to be Dutch fans. It's due to this remarkable run of success that it became known as, "The Dutch Mountain."
Peter Winnen became an instant Dutch fans favorite when he won for the first time in 1981. He returned, in 1983, to fight it out in a close slugfest with Jean-Rene Bernaudeau. The result; a repeat performance and a unique Dutch double. Today, Winnen has written an revealing account of his cycling days titled, "From Santander to Santander."
As far as I know this book hasn't been translated into English. And, I'm hoping (crossing my fingers) this desirable book will be widely available.
I'm ready to buy a copy! 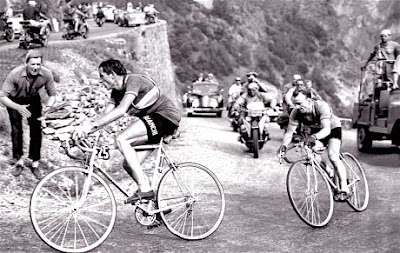 The Italian Mountain, 1952 Tour.
The Heron leading the Goblin to the summit of the 'Queen.'
With 6 kms to go, the Campanissimo drops him and goes onto a famous win. 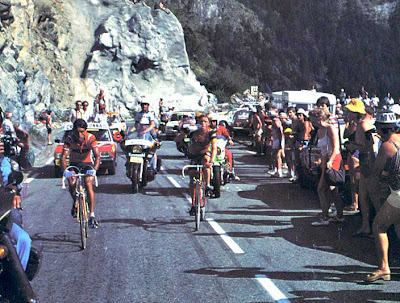 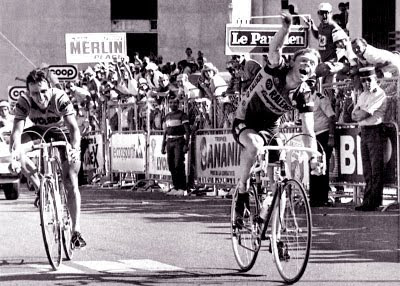 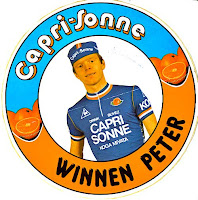