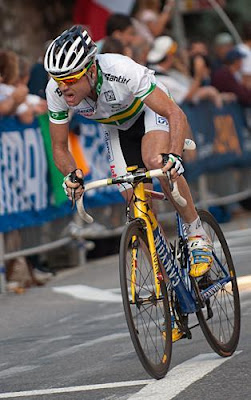 Evans chasing rainbows.
www.cyclingnews.com
Congratulations are in order for Cadel Evans surprise victory as he won the rainbow jersey. Critics have written him as the man that can’t win. And, now the Aussie can answer back with true grit. His attack was right on the money, well timed. After the seven hour race he found that bit of extra to crush his opponents. Spoken like a champion. And barely half of the original field of 201 riders finished the grueling race. I was completely stunned, as most folks, of his win.

He ends his season on a huge high after a few disappointing near misses, notably third at this year’s Vuelta. Pressured filled him mostly from the press and partly self induced. At last year's Tour he batted away a reporter whose microphone got too close to his injured shoulder. Then helmet butting a tv camera. He exploded when a pedestrian got way too close to his dog. He barked, "'Don't stand on my dog or I'll cut your head off!" The stress was too much for him to perform on the precarious cycling stage.

Surprise even for the heavily favored Italian & Spanish squads as the enigmatic Evans jumped away to finish alone. The Aussie stole a sweet victory. Spain’s prestige was somewhat salvaged as Joaquin Rodriguez had to settle for bronze behind Russia’s silver medalist Alexandr Kolobnev.
Kudos goes to lone Canadian, Michael Barry for fighting on for a commendable 18th place. Svein Tuft & Ryder Hesjedal earlier dropped out. They'll be back.

I’m sure the Italian and Spanish teams are crying over spilt milk. Evans turned the tables on them as he is the first Aussie to be world road race champion. He finally found his pot of gold … with a rainbow jersey. And for the beleaguered Evans, this just might be a start to a new beginning!
Cadel Evans World Championships