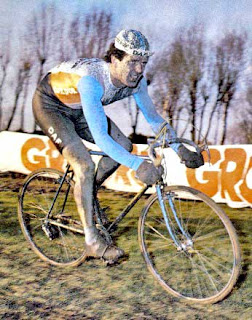 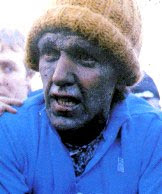 The Gypsy at home on the uneven terrain!
From: 'Fabulous World of Cycling.'
It's Autumn and the battle over terrain is cyclocross time. Originating from France in the early 1900s, Octave Lapize was one famous rider to use it for training. Lapize benefited from the merits of cyclocross to help him win the 1910 Tour de France. It's natural for many road racers to thrive and excel at cyclocross. Tour champs like; Jean Robic, Jacques Anquetil and Bernard Hinault enjoyed mucking it up. And three traditional countries that are the top nations in 'cross are Belgium, Holland and the Czech Republic.
Paris-Roubaix has the special parallel with cyclocrossers. How about the muddy faces, bikes caked with it and the awful surfaces & the gritty conditions. One famous rider was Monsieur Paris-Roubaix. Roger De Vlaeminck trained especially for his favorite test. It wasn't surprising that he conquered four Roubaix's. He was adept at 'cross an competed every winter in 10 to 15 cyclocross races. Monsieur P-R won 110 'cross races including the 1968 world amateur title and the 1975 professional title. No wonder he flew over the stones! 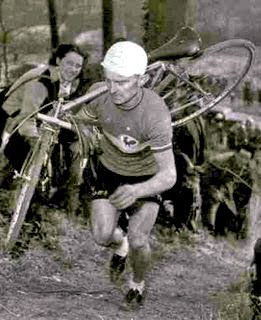 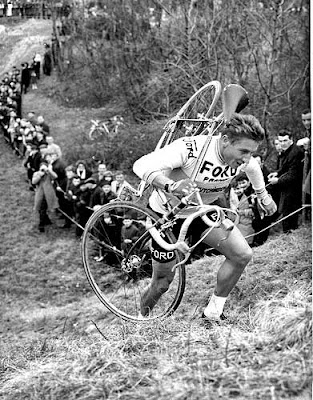 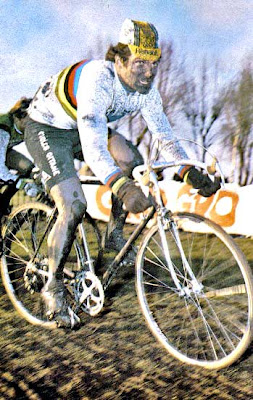 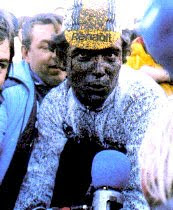 Richard said…
I believe thats where the "Maitre Jacques" comes in. He seems to always look good riding!

Eric said…
Are there any results out there that show how Jacques finished in any of these 'cross races? What I see here suggests to me that he's on a joy ride through the country, while the rest of the field is up the road eating mud.

Richard said…
Difficult to find his 'cross results but I imagine him so relaxed here that I'm sure Jacques had a glass or two prior!
October 19, 2009 at 9:37 PM