Foglia: the end of the world in the fridge! 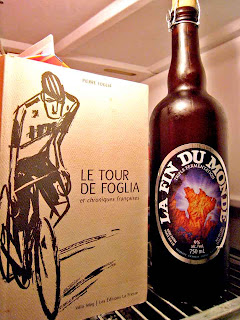 One of my all time favorite beers is from the province of Québec called, ‘La Fin du Monde.’ Translated: the end of the world. What a wonderful title for a beer. It’s fantastic probably due to the slightly spicy taste & the 9 % smile you obtain. Brewed to honour the great explorers who believed they had reached the end of the world when they discovered America. What a better way to pair it with the book, “Le Tour de Foglia.”

Written in French, Carolle is translating it for me. It’s about the journalist, Pierre Foglia. He writes a column for Montréal’s La Presse newspaper about his coverage of the Tour de France. His coverage is from 1992-2003.

Fabio Casartelli, the 1992 Olympic road race gold medalist, has one chapter for himself. And rightly so. It’s called, ‘Le Maillot Noir.’ All about the untimely and tragic death of the young Motorola rider that hit face first on a concrete wall at the 1995 Tour. His memorial is on top of the Col de Portet d’Aspet. I’m always sadden when I look at the grisly bloody image of the twenty-four year old rider curled in a fetal position on the road. Foglia reminds us how shock turned into mass mourning for the cyclists and fans alike. The next stage, the peloton marked respect for Fabio Casartelli by riding in close formation as a funeral cortège allowing the Motorola team to the finish line uncontested. A cycling code of conduct was observed with homage to a young fallen comrade. Very moving.

In his honour, the white jersey competition has since been named the 'Souvenir Fabio Casartelli'

I’ll be posting more stories about Foglia’s insightful book in the upcoming weeks. 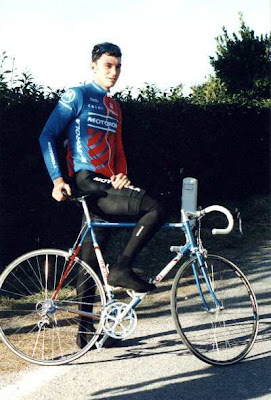 Beer book In the fridge... Review

Angelo senza la o said…
Fabio's bike is at the Madonna del Ghisallo chapel; can be seen in this photo: http://italiancyclingjournal.blogspot.com/2008/05/ride-to-madonna-del-ghisallo-part-ii.html
October 10, 2009 at 10:49 AM