The Return of the Toreador. 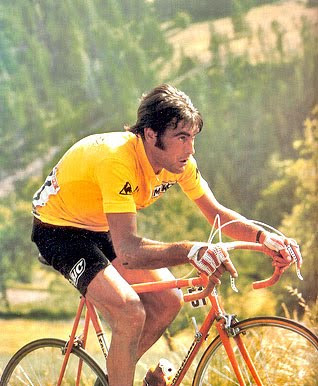 1973...
The toreador commanding in yellow.
Luis Ocaña was ready. Ready to win the 1973 Tour. Why? The Cannibal opted not to ride it. He already won an historical double by taking the Tours of Spain & Italy and a multitude of classic’s. Unexpectedly the Cannibal was full and graciously stayed away.

The door opened for the rest to step through for a chance for Tour victory. Most were resigned to be pretenders but some were at the doorstep looking in. José Manuel Fuente, Bernard Thévénet, Raymond Poulidor and Cyrill Guimard were those riders.

Ocaña remembered his 1971 tragedy of the col de Mente that cost him overall victory. A lung infection had him abandon in 1972. So, he set for revenge. He was steadfast to take this Tour. Six months of intense training before had him ready for battle.
The spectre of bad luck struck on stage two as a dog forced Ocaña and ten others to the road with minor bruising. If that wasn’t bad enough his BIC team manager, Maurice de Muer threatened the team if they did not work solely for Ocaña then they would all be ejected. The fear of God was in place. Ocaña knew of the pressure and proceeded forward in the winning move on the stage to Rheims. He gained time on all his adversaries especially climbing ace José Manuel Fuente.
If there was one rider to challenge him it was Fuente. To the ski station at Les Orres repeated attacks by Fuente were countered by the astute Ocaña. The toreador won that stage. No matter what Fuente could throw wasn’t enough to shake Ocaña. At Luchon Ocaña took a commanding lead and distance himself from Fuente. Poulidor had a scare falling off a ravine and crawled back up with a bloodied blow to his head. He quit the race. 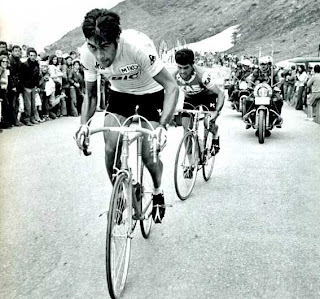 Only one could challenge him... Fuente.
So strong was Ocaña that Fuente slipped in the overall standings to third. Another stage win to the Puy de Dome & the final TT cemented Ocaña as the clear victor. A great win perhaps an empty one. I believe Ocaña would’ve loved to beat up on Merckx …instead! 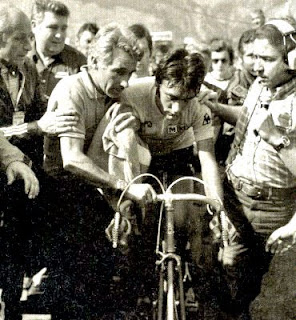 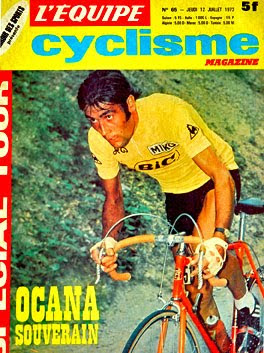 Richard said…
A fine year! The epic duel was great. Merckx finally had someone to really tussle with.
November 2, 2009 at 6:53 PM