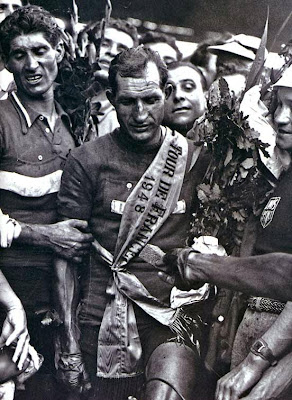 1948...
The ascension back to the throne for the two time Tour champion.
Gino Bartali was extremely devoted bikeman and to his Catholic religion. He had the presence bordering a god. That's what Mussolini's sports minister, General Antonelli declared after the Italian won the 1938 Tour.
So embraced by his countrymen he stayed true to his Italian roots. Although he battled in the Tour, he never rode in the northern classics. In a way, he never had to. Before the start of World War Two, the tough Tuscan already had achieve an amazing palmares. He won two Giro's, a Tour de France, 2 Giro di Lombardia and a Milan-Sanremo. A master of his craft, he was mobbed everywhere. One soldier protecting him yelled, "Don't touch him. He's a god!"
Bartali's god-like figure cut deeply into the fabric of Italian cycling. He was a powerhouse of a simple man made for the rigors of cycling. Religion was his other strength. The Vatican revered him, blessed by three popes. While riding he carried five medallions of the Holy Virgin around his neck and across his handlebars. He would have shrines in his hotel rooms for the Giro and Tour. And spiritual visits to the nearby church before a stage would not be uncommon. Even when he punctured the saintly Bartali never swore.
At the 1948 Tour Bartali was 34, ten years after winning his first Tour. He mounted the challenge. He won the first stage and took the yellow. But at the foot of the Alps, Lousion Bobet looked capable of beating the Italian. The young Frenchman was more than 21 minutes in front with the yellow jersey. The press denounced old Bartali any chance of the overall. But, in Lourdes Bartali prayed at the Virgin's shrine. He sent a telegram to the Pope asking for a special blessing for him and his teammates. Was he asking for divine intervention?
More sacrifice was in order...
At the rest day in Cannes, the Italian Prime Minister telephoned Bartali begging him to win the Tour. After an assassination attempt, the secretary of the Communist Party Palmiro Togliatti lied in critical condition and civil unrest was feared. If Bartali won then the country could settle down. Bartali answered the call and powered his way to Paris with more than 26 minutes over second place. He won his second Tour.
More so, Italy called Gino the Pious the 'saviour of his country'. 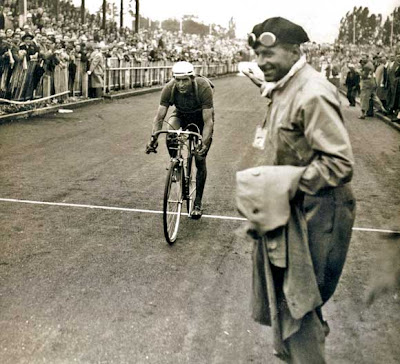