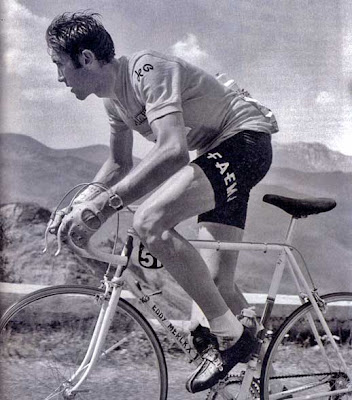 Climbing away!
In 1969, at just only 24 years old, Eddy Merckx had already amassed a list of palmares that was superstar status. So young and dominating his wins were an envy of many. He won prestigious races: Paris-Roubaix, Tour of Flanders, Milan SanRemo, Giro d’Italia & a World Championship title.
On June 2nd he left the Giro under a cloud of suspicion. He was disqualified for a drug test. Could it be a plot? Belgium thought so. Was there a conspiracy? Merckx denied any wrong doing and so he set upon clearing himself. He gave samples in front of journalists. And a lab in Milan cleared them. And it grows murkier. The test weren’t official and the UCI banned him for a month... for the Tour. Belgium put more pressure on and appealed and the UCI suspended the sentence. Merckx was finally cleared after a certain number of irregularities were found in the testing procedures. So stressed he became that he thought of quitting. 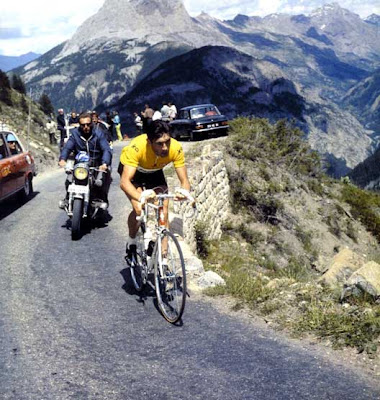 His solo breakaway!
The Tour was his stage race for exacting revenge. Symbolically he took his first yellow jersey after his Faema red guard took the TTT at his home town of Woluwe. He won six stages staggering and impressing all especially on the Tourmalet riding 130 kms alone with the yellow jersey. At the end his rule was supreme. He gobbled up the jerseys: yellow & green. Also winning the mountains and the combine classification and the combativity award. His second placed finisher Roger Pingeon was the closest any rider could come to scratch Merckx, a whopping 17m 54s behind. With this win he became the first Belgian since Sylvere Maes last won at the 1939 Tour. French cyclist Christian Raymond riding for Peugeot baptized Merckx the famous nickname, ‘the Cannibal.’ Race director Jacques Goddet called it ‘Merckxissimo.'
The Cannibal was born! 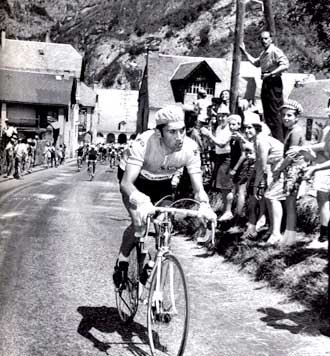 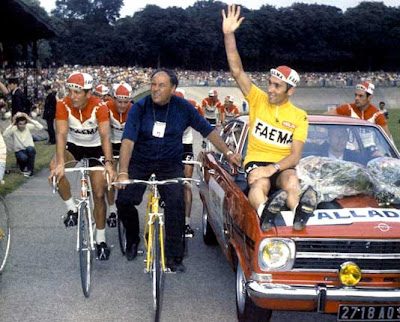 Eric said…
Cycling really misses guys like Eddy who won races from the front. There's way too much strategy and conservative riding in today's pro peloton. It was great to see Cadel finally win by attacking this year. Hopefully we'll begin to see more of the the aggressive tactics make their way back into the sport.
November 1, 2009 at 11:06 PM

Richard said…
What might help is the removal of the radio's. Riders will have to 'think' during a race. Just like the Merckx's and the Hinault's!
November 2, 2009 at 6:18 AM

AMR said…
We are so lucky Eddy didn't quit after the drug issues in late 60s.

Richard said…
Yes! He showed that he was a true champion and continued on even stronger.
November 2, 2009 at 6:50 PM