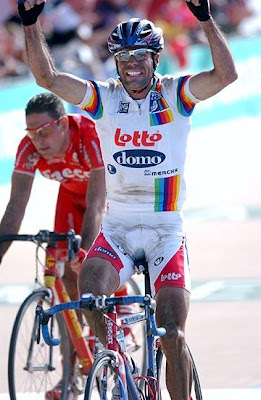 Can the 2003 Paris-Roubaix be called a truly gritty race? I should say so!
I had the chance to view the exciting race on dvd and I was pleasantly reminded. That it was an uncharacteristically dry one and extremely dusty was ....sheer discomfort for the riders. In fact, it looked unbearable. At times hard to see. A long hard day in the saddle for many as the Queen took her toll.
Two veteran riders were fantastic. Unfortunately only one could win...
Peter Van Petegem (De Peet) was just coming off an excellent win of the Ronde van Vlaanderen. The great 37 year old classic star shone in the Roubaix Sun by buying his time. The other was the rejuvenated 38 year old Vjatcheslav Ekimov. Having come out from 8 months away from cycling, the Russian rode strongly and nudged De Peet on the final straight of the velodrome. The track specialist tried but lost out to a gallant Dario Pieri (2nd) and to an even tougher Flandrian.
With his win, Peter Van Petegem entered in the record books as one of nine riders' to do the Ronde & the Roubaix double!
dvd Paris-Roubaix The Classics The Monuments