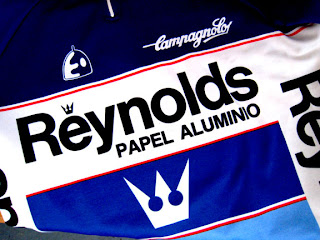 Love my Reynolds jersey!
I was out for a therapeutic ride this afternoon and my thoughts were of Pedro Delgado. What a great rider he was. More so he showed that he was a promising grimpeur starting his career with Spanish squad, Reynolds. I bought the team jersey at Cicli Pinarello in Treviso and wear it with a certain pride. Pinarello provided the bikes, notably the striking red Montello SLX's were used for the team. 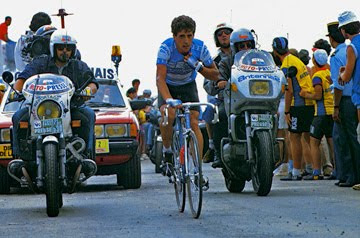 Going solo to Luz-Ardiden, 1985 Tour.
As I climbed my favorite hill I couldn't help but think back to his foggy climb up to Luz-Ardiden escaping splendidly alone atop the finish line. He beat back the Columbian dynamic duo of Lucho Herrera and Fabio Parra. No small feat. He switched teams earlier that year and rode for Seat-Orbea and perhaps it was lucky. He duly won the 1985 Vuelta and set about to conquer the Tour. His sixth place overall was good but showed that he suffered with a relatively weak team.
It was around 5 C today cloudy, although not foggy, but enough to give me an impression of that lonely but satisfying ride back at the 1985 Tour! 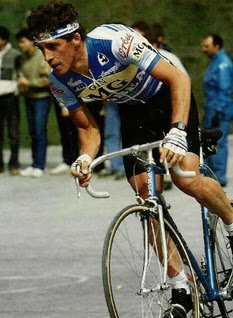 DS TradingCo said…
Excellent, I been a Perico fan since 1987 too.. all the way here in Singapore! I also signatured all my bikes as 'Delggado' and was also know by that moniker when i used to race for my country. Great post. Wish i knew how to get that jersey too! - Cheers mate. from - Raj, rajpannu@gmail.com, www.dicasatoscani.com
January 9, 2010 at 10:12 PM

I bought it months ago from Prendas.
Actually, I found the Reynolds culotte on Marcarini.

I grew up with Reynolds team in my heart. Now I´m 37 and seeing this maillot provides me a lot of good memories.

You gotta love that team made an impression at the Tour. Simple but bold jersey,love the design, too!
April 29, 2010 at 8:18 AM