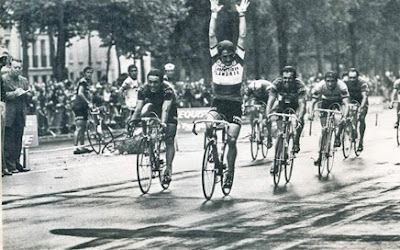 Maertens storms to another win...
this time at Paris-Tours, 1975.
I'm looking forward to the start of the new season and new squad BMC Racing Team seems loaded with three prominent guys to do some classic damage. That's George Hincapie (Gent-Wevelgem 2001), Marcus Burghardt (Gent-Wevelgem 2007) & Alessandro Ballan (Tour of Flanders 2007). On a given day, with a little luck, one of these three specialist can win.
One cyclist that had huge talent was the great Belgian sprinter, Freddy Maertens. He stormed to win the 1977 Vuelta including 13 stages, two world championships, & three green jerseys. He tore through numerous classics but oddly never won any of the five Monument one-day races. During his day, he was probably the finest sprinter. But he pushed high gears, perhaps burning him out to retire way too early at only 29 years old.
A new season has begun. Along with new transfers and new teams there's classic excitement in the air! 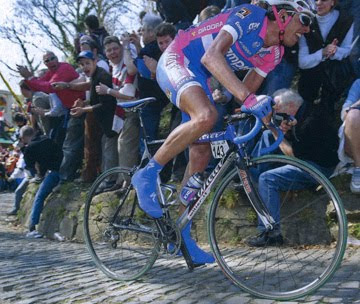 Now with BMC, can Ballan repeat at the Ronde?
Freddy Maertens The Classics

Jason said…
I'll be lucky enough to visit the Ronde this year.

Ballans a quality rider and I'll be cheering him on at the top of the Kapelmuur.