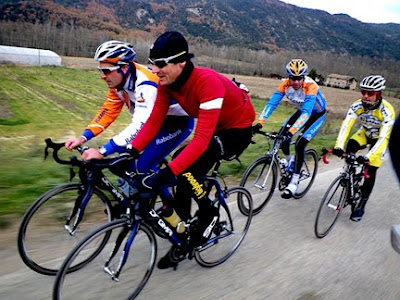 Cruisin' for a bruisin'
Van der Flecha & Barry (red jersey) warming up
to a new season!
The new Team Sky cycling team is making an impression ... on me.
Ever since becoming a news item with their win at the Cancer Classic down under, Team Sky has stormed out with an impressive one, two.
One: they place two black and blue men, Henderson and Sutton, right into the winning limelight. And, two for their minimalist jersey. Granted for their financial backing is probably the largest of all Pro tour teams. I like the retro look, one name simply emblazoned on the front. 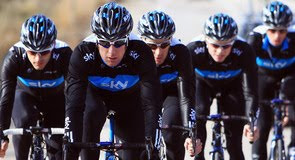 The black n' blue!
And money equals power. The team bus is high tech and eye catching capable of extending some 3 meters more than normal. Getting the edge over their opponents is crucial. Their race radios have gone through careful military testing to scramble anyone trying to listen in on critical tactics. The Pinarello Dogmas are reportedly lighter, with less paint. The weight savings is important especially going uphill. And notably, to create the first British winner of the Tour within five years. Add a hungry Bradley Wiggins and some young talent it's quite possible.
As the team is gaining in pro cycling acceptance they'll need wins. As the classics draw closer, the team has potential for victory; Loftvist, Boasson Hagen & Van der Flecha. Throw in veterans Arveson & Barry in the mix and you can see why there's more wins on Sky's horizon!
favorite jersey's Juan Antonio Flecha Michael Barry

Ron George said…
Thanks. Good post. I had seen a video on the kind of technology they are using but managed to miss out on how they're using special radios to prevent being scrambled. That's a first, isn't it?
January 22, 2010 at 10:54 PM

schmunk said…
I really hope Thomas Lovqvist grows in SKY. There's potential for that. I think he can be a top 10 and maybe ultimately an top 5 finisher overall in the Grand Tours.
January 23, 2010 at 10:27 AM