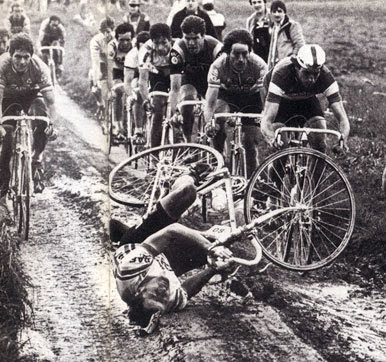 The 'pigs' in mud...
Kuiper hitting the deck!
Those were the words used by Bernard Hinault to describe his own hell, Paris-Roubaix. This was 1981 and the early start to the season was very good for the Frenchman. He had just won the Amstel Gold Race and the Criterium International. And wearing the rainbow jersey he won in Sallanches a year earlier signaled that he still had much to prove. The French media & fans wanted a big win to make his world championship title meaningful. And how, it was 25 long years since Louison Bobet triumphed over the pave.
He always hated the Queen of the Classics and made it known. "It has too many pitfalls, too many motorcycles, and too much dust," bemoaned the Frenchman. It was a muddy affair and after falling a number of times he regained his composure and even kicked a poor dog who got in his way. He entered the velodrome determined to win and found himself turned track racer up against the likes of strong men De Vlaeminck, Moser, Demeyer, Kuiper & Van Calster. The six men began to sprint and Hinault was too strong beating the classic men to the line.
That day the victorious Badger took a bite and won his only Paris-Roubaix and proved that his new stripes were ...very well earned! 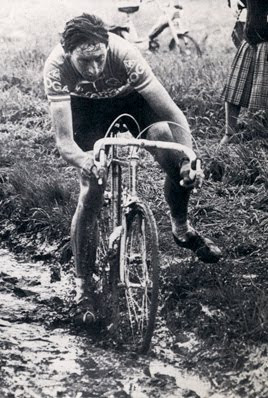 Daniel Willems dances on the mud.
Both from: The Fabulous World of Cycling.
Bernard Hinault Paris-Roubaix