Etoile de Besseges ... getting the horses in gear! 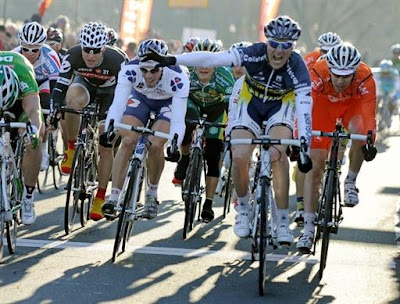 Bozic wins the massive opening stage...
Rollin (orange/yellow oversocks) charges in ninth!
www.cyclingnews.com
Today was a rough day for Cervelo Test Team as David Lloyd crashed into a tree during the opening stage. He doesn't know if he's continuing the French stage race but I have a feeling without him a certain Dominique Rollin is eyeing a stage win.
Rollin is called the Horse from the North and was part of the massive sprint to the finish. He came in ninth behind stage winner, Bout Bozic (Vacansoleil). The Canadian is gunning for a stage win to set him for his first Cervelo win. And maybe the sunny, dry conditions were slightly against him. You all remember him winning the wet cold stage 4 at the 2008 Tour of California. After that stormy stage he confidently said, "Even when I'm on the bike I think 'I can't stand this,' the worse it is the better I do, so keep it coming."
Which makes me think that tomorrow's stage, around 140 kms like the rest of the stages & sprinter approved flat, is forecast for rain. I have a very good feeling Rollin will get his horses into the right gear!
Dominque Rollin