A giant on the pavé! 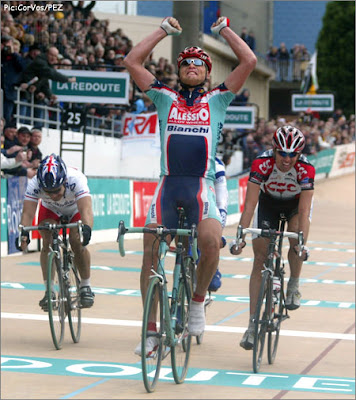 Sweden's first...
Big Maggy celebrates with his new titanium Bianchi, and rightly so!
Big Swede, Magnus Backstedt was a true giant in the classics. One of those rare big riders (over 2 metres & 90 kgs) to excel over the pavé. It was the enormous power that he could force onto his bikes. At the 2004 Paris-Roubaix he was one of the four survivors with a few kilometers to go. The Lion of Flanders, Johan Musseuw looking to join the exclusive four wins club with Roger DeVlaeminck, punctured! He was the overwhelming favorite along with Peter Van Petegem to win but it wasn't to be. Only four entered the velodrome as Cancellera led Hoffman, Backstedt and the diminutive pocket rocket, Roger Hammond. The big Swede was too much and beat the three in a classic sprint!
Backstedt punishes his bikes. And with Alessio-Bianchi a specially made bike was made for his foray over the pavé. Bianchi engineer's discovered that titanium suited his hard riding style and crafted oversize tubes with carbon forks. It worked successfully in 2004 and he almost did again the following year where he finished in fourth.

The following year...
he move to Liquigas with his speciality made titanium
Bianchi to finish fourth in Hell!
Bianchi Paris-Roubaix