Inside the fridge; wine and the 1967 Tour 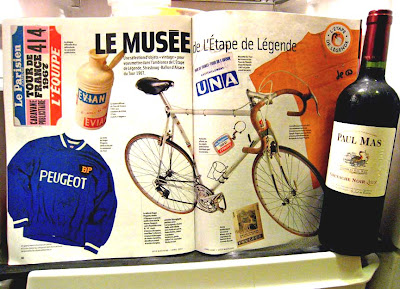 
Frenchman Roger Pingeon entered the 1967 Tour hungry to do well. And when he took the stage to Jambes he secured the yellow jersey all the way to Paris. He rode for Peugeot but the Tour went back to national rather than to trade teams. It was the post Anquetil era and organizers felt keen to start off the new era.

What better way to show that era is with Pingeon's bike and gear from the 1967 Tour. This except is from French cycling mag. (April 2007) , Velomagazine. In it there's an excellent double page of Pingeon's beautiful classic Reynolds Peugeot PX-10. The set up was top of the line: 36 spokes on Ambrosio rims, 5 speed cluster, Simplex derailleurs, Campagnolo pedals & Mafac brakes.

The Paul Mas Grenache Noir 2008 is from France, of course, and lends an air of all things French; namely cycling and wine. It's super dark red with blackberries and vanilla with a hint of spiciness at the back end. C'est bon!

I couldn't help but toast that Tour, and to the memory of Pingeon's Peugeot teammate, Tom Simpson! 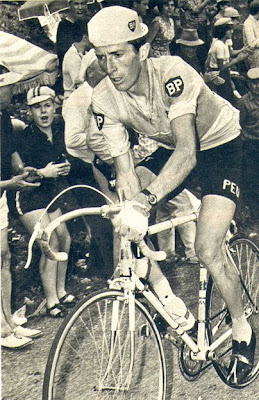 Looking good...
Pingeon wearing the yellow jersey
on his PX-10.