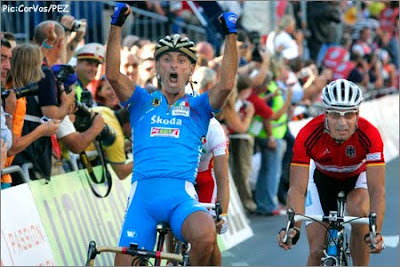 The Azzurra blue is coming!
The weather's been cool at Paris-Nice. March in France is sunny and crisp. And the gloves are definitely on for the riders' as the prologue & stages 1, 2 are completed. Dutchman Lars Boom is lowering the ...boom and staying, so far, in the leaders yellow jersey. Guy of Le Grimpeur, was quick to support fellow Kiwi, Greg Henderson's big stage 1 win edging out Grega Bole. Not so good was Gert Steegmans road crash that broke his left collarbone during the prologue has forced him out of the race. He had successful surgery with pins & plate and hopes to come back for Paris-Roubaix. 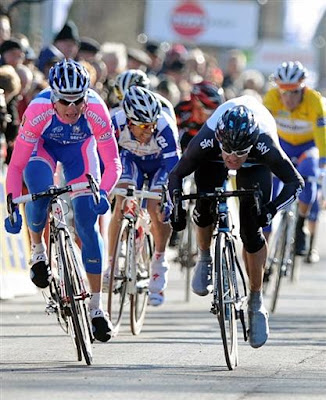 Kiwi flying with gloves on...
Henderson (Sky) outsprints Bole Stage 1, Paris- Nice.
What's with the weather, anyways? Due to the reports it's snowed a pile in Livorno for the start of the race of the two seas. If that's true more than gloves will be needed for the blue skin riders. Race organizer's will dedicate Tirreno-Adriatico to former Italian national coach Franco Ballerini who died tragically in a car rally accident. Also a fair play prize will be awarded after every stage. And the overall leader will wear a blue jersey symbolizing the azzurra blue worn by the Italian squadra at the world championships.
One item off the list is the massive climb to Montelupone. I'm already missing this gem of hurt but maybe just maybe the pain will return on the Forca di Presto, midway on Stage 5. All the top sprinters will be there and they all have alot to prove before Milan Sanremo. Cavendish is tipped to win stages but look out for his nemesis Thor Hushovd. Tyler Farrar looks ready to finally cash in. Thomas Lofkvist is my man for the overall but Cadel Evans is my darkhorse! 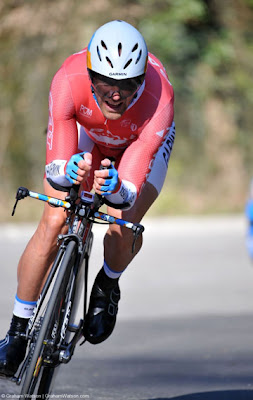