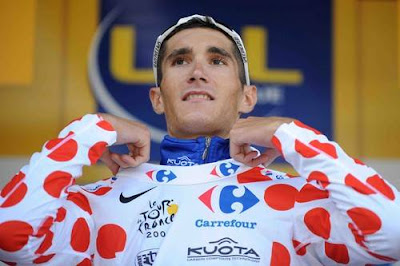 Sun King?
Brice Feillu wears the climber's polka dot jersey
after taking stage 7, Tour 2009.
I felt stir crazy missing the last two days of riding. My second cup of coffee helped me as I left under the cover of clouds with the promise of ...Sun. This morning I was off on my UBC ride and I'll be purchasing a cycling computer soon. The shop is currently out until mid March so it's the waiting game. All I need is a simple, straight forward read out on distance/trip and time spent riding.
The cloudy skies didn't deter me in thinking of this Sunday's Paris-Nice and some heavy hitters will be on board. Sanchez won't be back to defend his title but there's plenty of other's to do battle. Contador looks set and ready for the win but he's up against the likes of Leipheimer, Haussler, Valverde, Kreuziger & Schleck.
Paris-Nice will be full of mountains and one I believe will win the mountains classification is Brice Feillu of the Vacansoleil Team. Last year's Tour was remarkable as he made his mark winning the mountainous seventh stage. He won the mountain classification in this year's La Ruta del sol to further lay claim that a certain polka dot jersey will be waiting for him on his way to the Sun!
Grimpeurs Paris-Nice