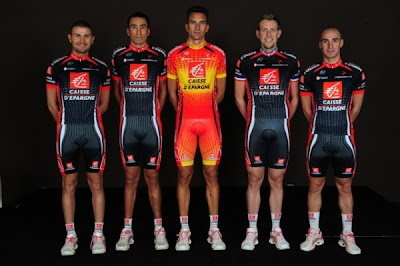 Improvements to 2010 Caisse d'Epargne...
(l to r): Marzio Bruseghin, Juan Mauricio Soler, Ruben Plaza, Christophe Moreau, Jose Joaquin Rojas.
I almost forgot that talented climber, Juan Mauricio Soler is riding today's Vuelta a Castilla y Leon stage race. This is his first season for Caisse d'Epargne and hopefully a fruitful one.
Soler burst onto the cycling scene back in the 2007 Tour de France. Where he showed his skills with amazing attacks in the mountains winning stage 9 along with the polka dot jersey. His talent reminded me of his fellow countryman, Lucho Herrera. Importantly, Herrera was the first Columbian rider to win the coveted mountains classification in the 1985 Tour and again in 1987. But fans lust for another dominating pure climber. Soler seems to fit the bill.


Every since his 2007 breakthrough year, he's had bad luck with injuries and subsequently disappeared from the cycling radar. He abandoned the 2008 Giro after stage 11 due to respiratory problems. He broke his wrist on stage 1 and had to quit the 2008 Tour. And this past January, in Ramiriqui Colombia, the grimpeur escaped a near serious road accident. He was hit head-on by a car while training and took time to recover.


Now, he's back with a new team and I hope his problems are finally behind him. I definitely believe he can capture past glory once again! 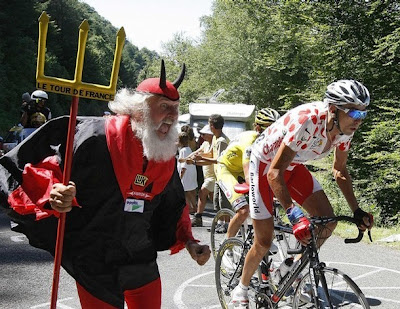 Irish Peloton said…
I also hope he recaptures the form he had in 2007. He was definitely an exciting climber. He also has one of the most awkward looking riding styles in the peloton wouldn't you say?
April 15, 2010 at 3:28 AM