A very confident Cadel Evans attacked decisively on top of the Mur de Huy to win the Fleche Wallonne. A big win for him since winning the World's in Mendrisio  attacking with kilometres left on a hilly course. Sounds familiar? I'll be honest, I didn't pick him to win. I was thinking of the curse of the Rainbow Jersey but no more. 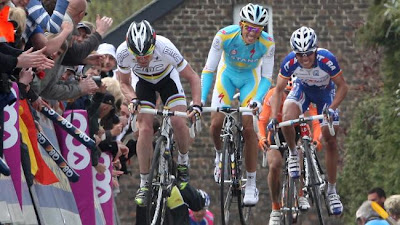 Back in 1971,  Eddy Merckx won the rainbow stripes at The World Road Race Championships in Mendrisio. So, in 1972,  he honoured the stripes by winning La Fleche Wallonne, Liege-Bastogne-Liege, Tour of Lombardy, Tour de France and the Giro. 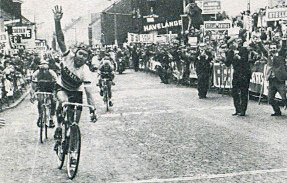 Evans becomes the fifth rider to win the Fleche Wallonne having worn the rainbow jersey. Can LBL be next? It would be a perfect Ardennes double. And his sights are set for Grand Tour goals; Giro pink and Tour yellow. Evans said, "It's a special honour to ride with the rainbow jersey on my shoulders and the goal this season is to honour the rainbow jersey." If that's what I think he's saying, look out for more major wins for the fearless Aussie this season. 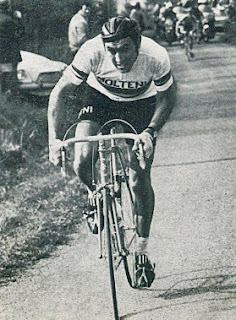 The Cannibal & his stripes on his way to winning
the 1972 Liege-Bastogne-Liege.
Eddy Merckx La Fleche Wallonne Liege Bastogne Liege The Classics World Championships