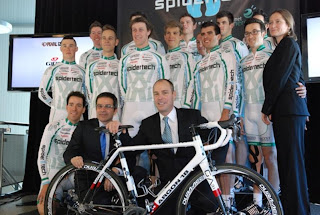 Steve Bauer has plenty to smile about!

Now that the Giro has started the Tour of California will start in a week. Among some of the riders lured away from the Giro there's a small Canadian team ready to step into the spotlight.

Spidertech powered by Planet Energy worked hard to get selected and with strong stage results look forward to impress. The director sportif is none other than Steve Bauer. And he'll be guiding this young squad to glory. A stage victory will be valuable to the team as a stepping stone towards the ultimate goal of the Tour de France. The plan is to become the first Canadian team in the Tour and eventually place a Canadian on the final podium. I believe with plenty of hardwork the team will attain that French goal. And the team's average age is only 24 years old with headline rider Martin Gilbert. Former Garmin rider and only American, Lucas Euser is on board and will provide that much needed experience & horsepower.

I'll be cheering for the guys and their first steps forward!

The Team for the 2010 Tour of California:

greginvan said…
My money is on Hesjedal before its on anyone from Spidertech. If there is a canuck stage win there, lets hope its Stage 4....so i can watch it live!
May 8, 2010 at 11:26 PM