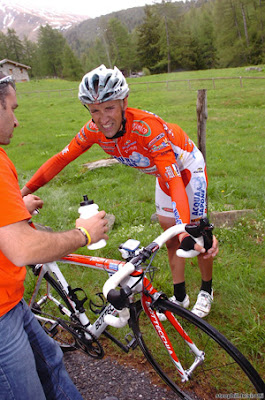 Wild day of riding as Ivan Basso & teammate Vincenzo Nabali took care of any doubt to take over the maglia rosa. It was epic this stage 19 to Aprica worthy of praise & awe. 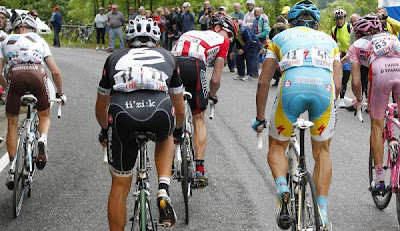 Stefano Garzelli looked set, attacking like a madman up and down the Trivigno. He was a man possessed before he stopped on the Passeo del Mortirolo, not to pray but to gather more strength. He should've prayed. Garzelli took a very long breather, rested then got back on his bike never to be seen until the finish line. He hobbled in 40th 23 minutes behind.

Cadel Evans fought vainly and couldn’t hold onto the Basso train (Nabali & Scarponi). Hair raising was what I called his tussle with his bike. He descended down the Mortirolo and almost crashed into a vehicle. He said it was his brakes. I thought he was done for. Fortunately he corrected and avoided a near race catastrophe. Evans joined a surviving group trying to make up time over the Basso trio. Arroyo fought so hard with a brave descent and joined Vinokourov in defending his maglia rosa.


Evans, Sastre, Gradet joined Vino and Arroyo and no one seemed willing or had any strength to put on a sustain attack to the Basso trio. The Liquigas riders just turned on the gas and with the help from Scarponi flew into Aprica.


Scarponi took the exciting stage but Basso won the maglia rosa. I hope it's not  over as yet, stay tune for the next harrowing stage over the Gavia! 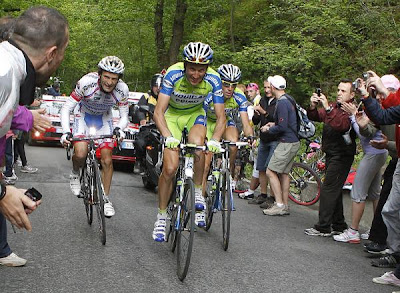