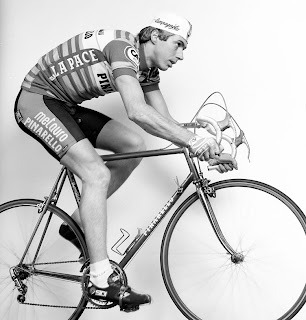 This Sunday marks an exciting addition to the 62nd Critérium du Dauphiné. It has 21 hairpins and goes upwards. You guessed it, that's the famed Alpe d'Huez. 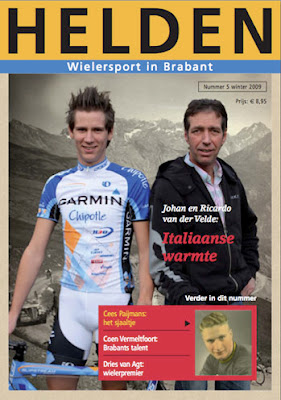 All in the family...
Ricardo & Johan.

It's also known as the Dutch Mountain for the eight famous Dutchman to conquer it since 1952 Tour. And a sea of orange is awash over the mountain with screaming Dutch fans. Which makes me wonder how the Dutch riders, coming from a flat country, have an inherent ability to climb so well? They do it masterly. In fact, it's a long time coming since the last orangeman winner Gert-Jan Theunisse did so in 1989.

It's 14kms of climbing and is included in the mountainous Dauphiné stage race, the warm up to the Tour. Many of the top GC riders will be in the hunt and I like these grimpeurs to add their special touch upwards; Colombian Juan Mauricio Soler, South African John-Lee Augustyn, former winner (2007/2001) Frenchman Christophe Moreau & Spaniard Sam Sanchez.

Back in 1980, the last Dutchman to win the race was the great Johan Van Der Velde. He had great Italian success winning the points jersey in the Giro. Again, he's Dutch and climbed very well.  His son Ricardo is on the Garmin Transitions team and he stands to be a promising recruit for next season. Interestingly, Ricardo & teammate Christian Vande Velde may share the same family roots. Both families hailed from Ghent!
Critérium du Dauphiné favorite jersey's Grimpeurs Juan Mauricio Soler Mountain Fever Pinarello

Unknown said…
I'll be Johan is glad that his generation never had to wear horrible white-crotched shorts!
June 4, 2010 at 3:43 PM