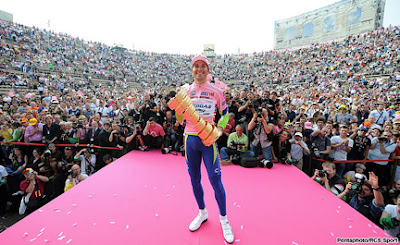 The Giro proved to be one of the most exciting editions that I ever watched.
Ivan Basso has to be the happiest rider, coming back from his 2007 doping scandal and winning a not always to be sure and competitive race. 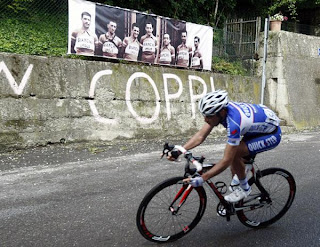 Onto stage 20 with five high challenging mountain passes including the Passo di Gavia or better known as Cima Coppi. Bad weather threaten, but thankfully the route would be uninterrupted. As, Swiss grimpeur Johan Tschopp escaped with Gilberto Simoni. As they approached the highest point of the race, Cima Coppi, Tschopp took the sprint. The on form Simoni looked set to finish his final Giro with the Cima Coppi prize but it wasn't to be. The clever Swiss escaped alone to win the stage splendidly. But wait!. Cadel Evans gritted his world champion's teeth and kept his amazing pressure alive somehow managing to tear closer to Tschopp. He put in a brave attempt and came in second 16secs behind.
What also emerge are the up in coming stars that performed well and also surprised...  Aussies dominate:  Richie Porte held onto the white jersey winning the best young riders classification finishing consistently in 7th overall . Matthew Lloyd fought hard to win the green mountains jersey. Cadel Evans was a worthy winner of  the red points jersey and finished in a solid 5th overall and winning the Trofeo Bonacossa (top rider voted by journalist). Frenchman, John Gradet (13th, Ag2R) & Dutchman, Bauke Mollema (12th, Rabobank) are both talented climbers and their success in this Giro promises more finer performances soon to come.
As this Giro closed, a last hurrah for former two time Giro champ Gilberto Simoni as he finished in Verona's Piazza Bra adorned in a black jersey/short combination with a black helmet. A classy final look at the popular 38 year old rider looking like a Roman gladiator as he waved a final farewell to the arena crowd.
And what about this years Giro? What made it so fun to watch? The organizers got it right by including the historic mountains of the past and honoring heroes; Coppi, Bartali & Pantani. Also, a refreshing crop of talent emerged, too.

So these simple words sum it up best, from the best young rider Richie Porte: "Thanks to Italy for a great race!" 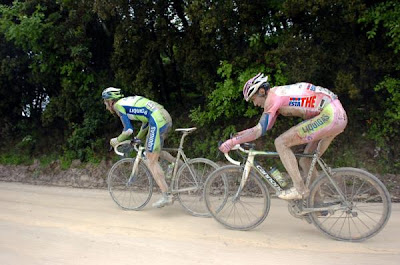 Strade bianche: a new classic in the making. 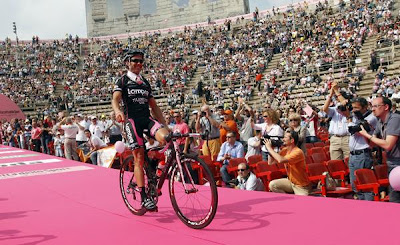 Unknown said…
i'll admit that i was rooting for evans, but it does seem to me as though this route was extremely unbalanced. i mean, jeez, if you're going to put in that much climbing, at least have the decency to balance it out with one long time trial. the 1987 tour had a final week arguably as hard as this giro's, but this was coming in the wake of an 87.5 k (!) itt between saumur and futuroscope.
June 2, 2010 at 11:36 AM