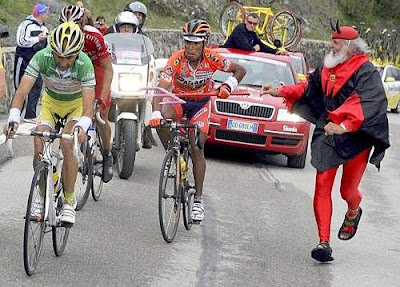 Put a fork into him he's done!
With a sense of humour, Perez & the Devil pokes at
Piepoli on the Tre Cime Di Lavaredo climb,
2007 Giro.

Julio Perez is an exceptional mountain climber from Mexico. He's made steady and successful progress riding for mainly Italian teams. Like his fellow countryman before him, Raul Alcala, he has carried his country's hopes and aspirations in the Grand Tours. Perez loves the Giro having won a stage up the Passo Pordoi (2001) & two stages to San Giacomo, Corvara Badia (2002). He was so consistent in the 2002 Giro winning the green mountain jersey and finishing 19th overall.

In the 2007 Giro, climbing high on the Tre Cime Di Lavaredo (Three Peaks) Perez looked set to win that exhausting stage. He climbed steadily and took off on the steep slopes with a group of fellow grimpeurs including the infamous duo Ricco, Piepoli, and Colombian Ivan Parra. With 1 km left Ivan Parra attacked and the twins could only follow. Chaos as the screams from the Tifosi drove them onwards to the summit. Ivan Parra could only hang on as the evil twins did a one two sandwich on the Colombian. It was a vicious climb as the riders rode their lowest gear appearing as if standing still. Instantly, I remember the deathly drumbeat soundtrack from the 1974 Giro film, 'The Greatest Show on Earth.' Julio Perez fought bravely too and came in fourth. 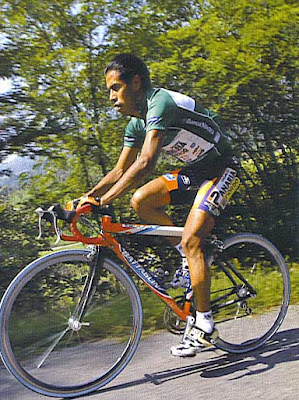