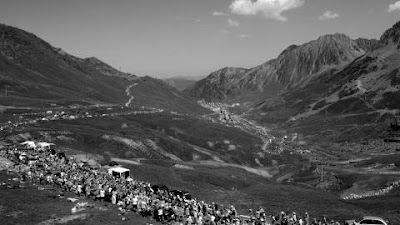 Le Tourmalet
I can't wait for July 3rd, for the start of Le Tour is in Rotterdam with the 8km TT. Organizers revealed an increasingly degree of difficulty thus turning up a huge notch on the excitement meter. But as the Dutch door closes the Belgium door opens with three stages with the most demanding on stage 3. A Franco-Belgian pave tandem of seven beautiful cobble sectors totaling 13.2 km with three sectors in Belgium and four in France. A little of Paris-Roubaix will be borrowed as one of the toughest sectors will test the riders bikes & bodies passing through Haveluy. Very important as some riders can lose time here that translates into difficulty later in the race especially in the mountains. 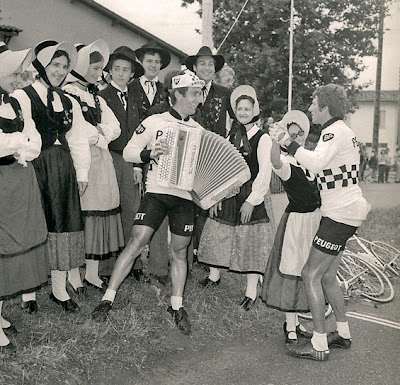 Jean-Pierre Danguillaume (left) & Bernard Bouffeau rightly celebrating...
1974 Tour.
With the innovative inclusion of the pave the riders will have to look up to three mountain top finishes; Avoriaz, Ax 3 Domaines, and the Tourmalet. The Tourmalet, the highest mountain pass (2115m) in the Pyrenees and first climbed 100 years ago by Octave Lapize in the 1910 Tour. It will be 'honored' or rather climbed twice on stages 16 & 17.
Stage 16 the riders must contend with the mythical four cols in this order before the finish in Pau: Peyresourde, d'Aspin, Tourmalet, & d'Aubisque. Then, a welcome rest day for the riders. Because the riders wits will be tested as they battle on stage 17 to the finish on top of the Tourmalet.
The only other time it finished on top of the Tourmalet was in 1974 where Frenchman, Jean-Pierre Danguillaume soloed to win.
It promises to be exciting and very difficult... bring it on!
Mountain Fever Paris-Roubaix Tour de France Vintage Tour de France