Mano-a-Mano at the Dauphiné 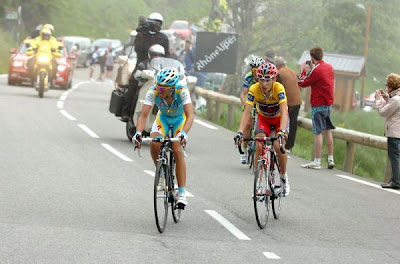 Contador & Brajkovic leaving Szmyd and
going about it mano-a-mano!

Explosive! That's what the racing up the famous L'Alpe d'Huez was today. A hard working Alberto Contador with the help from his controlling Astana team made it his second stage victory of the Dauphiné.

Contador could not, as much as he tried, get rid of the amazing Janez Brajkovic. See sawing back and forth from attacks up the face of L'Alpe d'Huez was pure fun to watch.  El Pistolero kept firing as he decimated the peloton one rider at a time. He could win by taking time out of Brajkovic. But only if he could shake him off. Give credit to Sylvester Szmyd & Jerome Coppel for refusing to lie down and at times made it a fight of four. With 2 kms left Contador and Brajkovic turned out to be the final battle royale slugging it out as they neared the finish line. It was evident Contador looked the weary one of the two as Brajkovic remained close & collected. But the Spaniard had that extra jump to take a hard fought battle and the queen stage of the Dauphiné was his.