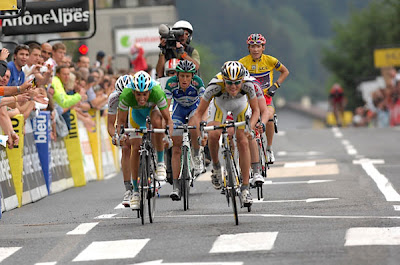 Brajkovic, in yellow, gets ready to celebrate his victory.
Van Garderen sprints past Contador (green jersey) for 5th on stage 7.

Superb ride for the young Slovenian Janez Brajkovic on winning the action packed Dauphiné. Heavy favorite, Alberto Contador won two stages and placed second overall. He stated his goal was to place well and work toward fitness for the Tour.  I almost thought he was playing a little cat & mouse with the media/ fans. It kept me and I'm sure many of us guessing.

It was marvellous to watch as the race whittle down to these two as they attacked each other up the legendary L'Alpe d'Huez. Contador fired the shot to win the stage but Brajkovic secured his overall victory. What impressed me was this rider was fearless right after he took the leader's jersey & stage win on stage 3's TT. Contador loss 1:46 and that deficit would haunt him. Brajkovic defended his yellow jersey right into the mountains taking care of everything Contador could throw at him. I found it refreshing that someone else could provide the rivalry against the Spanish superstar.

Now, with his fantastic Dauphiné win, Brajkovic has to stay on the sidelines and wait until after the Tour de Suisse to know if he get's the nod to pursue a Tour dream. I hope he does get that chance.

Equally impressive was the performance by 22 year old, American neo-pro Tejay Van Garderen to claim third overall. His gallant charge started with a fine 4th in the TT and kept his super form into the mountains. He's not going to the Tour but the HTC Columbia squad has him in the Vuelta a Espana. And looking so much like the champion, Norwegian Edvald Boasson Hagen took off for a return back to winning ways. Stage 7 and final stage was his, winning alone on the same course as the Badger did in the 1980 world championship road race. Now, with his injury behind, the 23 year old looks to his first Tour in July. 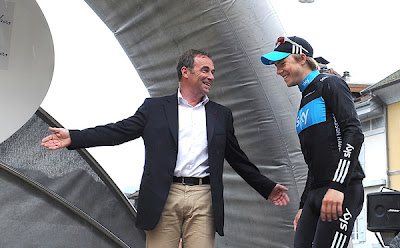