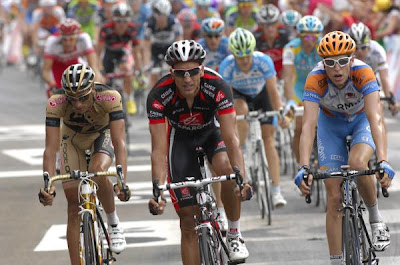 Ryder Hesjedal seems destined for more greatness. His tour de force is forging him to become as popular as another famous Canadian. 1988 was the last time a Canadian won a stage in the Tour. That was Steve Bauer as he finished fourth overall. An amazing achievement and only one position shy of the podium. 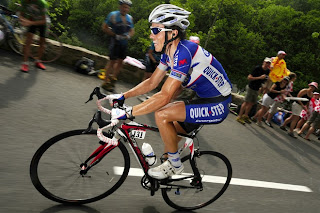 Now, Hesjedal is in a fantastic position currently in third overall and ever hopeful of stage victory. The seventh mountain stage was ultra hot (well over 30C) and forcing many to ride conserving energy for the high mountain stages to come.

This Tour is so exciting. A new climbing star has emerged. Young Spaniard, Rafael Vaels Ferri of  Footon-Servetto flew to a nice second. He's the new white jersey holder. Cadel Evans looks ripe & ready to take the yellow and with the high mountains zooming, I bet he does it. A French Revolution is happening. That's how I see it with the torrid performance in the Jura mountains by Sylvain Chavanel. Now, with his second stage win he's riding like a changed man letting everyone know that his early Spring bad luck is ...memory. Wrestling the yellow jersey from Cancellara he looks serious indeed. And French teammate, Jerome Pineau has the polka dot's and his closest rival is his buddy Chavanel. 25 years is a long time since a Frenchman won their own Tour. Although, It's early on French hopes like Canadian hopes are more than just a dream! 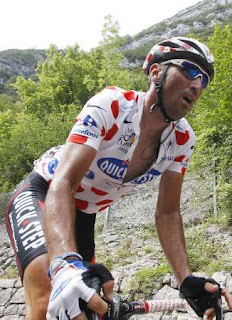