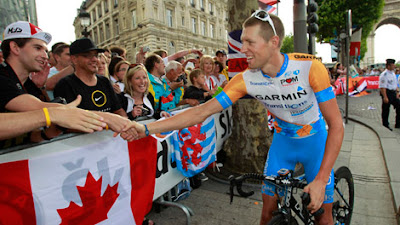 One of my favorites this Saturday's Clasica San Sebastian is Ryder Hesjedal. Coming off his excellent performance finishing seventh overall at the Tour de France, I'm thinking he'll do better than his 5th place of last year. 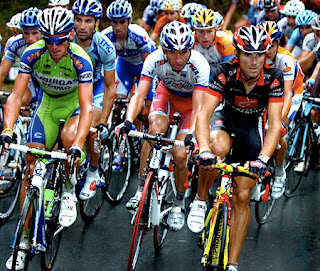 The 2009 San Sebastian...
Ryder in the lead pack finished in fifth!

Spain's biggest one day race has a new twist of pain. At 234km in length, with six category climbs, first run in 1981, the picturesque route is changed. It will be hot as the riders will tackle the Alto de Jaizkibel (7.8km/ 6%) and the final killer the Alto de Arkale climbs twice rather than once. This could mean a small leading pack as the race closes to the finish. And it should benefit Hesjedal than a mass finish. The Garmin-Transitions team will be working for the 29 year old Hesjedal and will try to place him in the right position for the kill.

After San Sebastian, Hesjedal will go to the GP Quest France (Aug.22) then to the inaugural pair of UCI ProTour events in Quebec City (Sept.10th) & Montreal (Sept.12th). He'll be rightly showcase as Canada's most successful road racer since Steve Bauer.

The Quebec City race has 15 laps of a 12.6km circuit starts and ends in the Old City and goes steeply uphill to the Grand Allee for a total of 189km. Montreal is 16 times up and down a punishing 12.1km circuit on Mount Royal a total of 193.6kms.

I've seen the Women's World Cup race in 1998 (here on a previous post) on the Mount Royal course and it will be tough, loud & exciting. 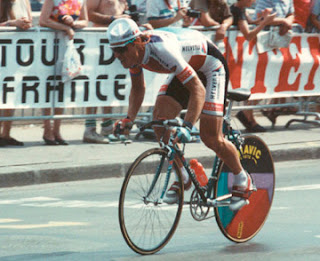 Bauer Power back in the 1989 Tour...
Steve's best San Sebastian was 6th in 1990!
Ryder Hesjedal Steve Bauer The Classics