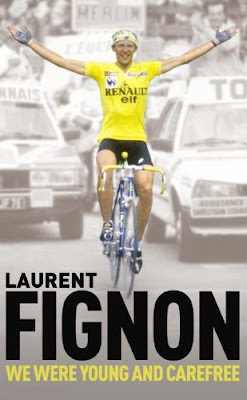 As my birthday is fast approaching, Laurent Fignon's much awaited book, 'We We're Young and Carefree' has arrived in the mail. He's unspoken, brash and tells it like it is without holding back. His two Tour victories (1983 & 1984) still bode well as epic and caused the French fans to open their hearts to a new, young hero. The eight second loss from Greg LeMond was his fall from grace yet he survived it all, somehow.  That's what I aim to find out in this much anticipated expose on le Professeur. 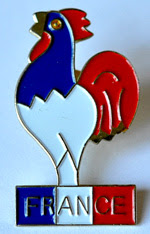 A lot to crow about!

Fignon was back in this year's Tour. This time commentating for French TV, and going through his own battle with cancer. He was reportedly looking surprisingly good and still applying his in your face opinions.

Just like his prolific riding career, he attacked even the winner, Alberto Contador & second place finisher, Andy Schleck. Fignon weighed in on their friendship to L'Equipe... "What we saw between them on the Tour was inconceivable. Cycling shouldn't just be a game between mates. Competition should be without pity, especially when the race has begun. Nothing should top it. I never fell into the arms of Greg Lemond or Bernard Hinault. When you are rivals you can't like each other. He manipulated Schleck by playing psychological games with him. He compensated for his weak moments by bringing up his strong personal relations with his rival. Schleck went on about his famous plan to counter Contador. We never saw it. It'll remain a Tour of lost opportunity, especially for Schleck."

The last candid words was directed towards Contador, "It's hard to say whether he was less consistent than in 2009. Perhaps he has discovered that last year he was particularly exceptional and this year he has just found his normal level. To find that answer we have to wait until next year."

Fignon seems outspoken as ever ... I'm eagerly looking forward to this! insideprocyling said…
Overall it's a good read and contains some eye-opening anecdotes on racing in Colombia, riding with Bernard Hinault and being under Cyrille Guimard's direction, and more. I've long been a fan and so some stories were already familiar but most cycling fans will enjoy the book.


Experience the great scenery of Italy on September for the 2010 Cycling Tour. Ride and enjoy Italy!


This would be totally exciting!