Into the mouth of the Pyrenees 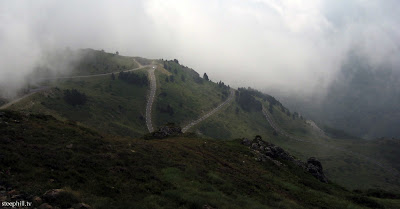 Stage 14: French pride was aglow for her fourth stage victory, this time by a stylish ride by Christophe Riblon. The French were raving mad as he profited from his adventurous solo break of 168 km. With the start today of the great Pyrenees, marking the 100th anniversary of the high mountains in the Tour the excitement ratchets up a notch. 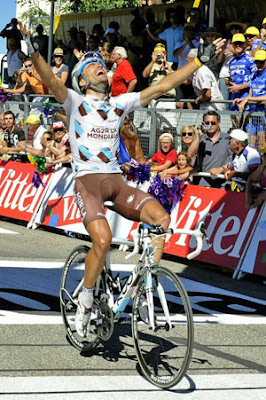 My emotional favorite, 35 year old Carlos Sastre looked set to have a strong ride reminiscent of his stage win back in 2003. Attacking and riding with his familiar panache was a touch of the old Sastre again. He didn't win but it doesn't mean he won't be back.

Ryder Hesjedal finished a very good 12th place, in front of Vinokourov. Consistent and finding his climbing legs on the first Pyrenees stage the Canadian 'Weight of the Nation' lies in 13th overall in front of a resurgent Nicolas Roche. The Irishman rode wonderfully clawing in 18th place and as he crossed the finish line smiled for his victorious teammate Riblon.

Two riders to emerge into the limelight was Sammy Sanchez & Denis Menchov finishing in second & third. As Schleck and Contador watched each other these two dueled and provided what maybe the battle for third overall.

I can't wait what happens in tomorrow's climb up the Port des Balès (1755 m) and the screaming descent into the finish in Bagnères-de-Luchon. It should prove equally dramatic!
Alberto Contador Grimpeurs Mountain Fever Ryder Hesjedal Tour de France