Nice n' Easy does it 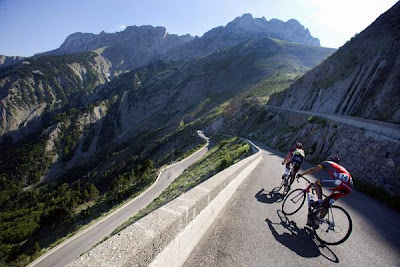 Take a deep breath...
Down the Cote de Laffrey.

Today, all the riders were mindful of the heat and suffering already in the Tour. Yesterday's grueling stage was enough of a reminder as today's stage 10 was a recovery stage. Most of the riders basically took it easy. Even yellow jersey, Andy Schleck went back to the team car for bidons for his teammates. Hey, If Cancellara can do it...

On top of the the Cote de Laffrey the French battle for the polka-dots were contested as Jerome Pineau re-took the polka-dots from Anthony Charteau. Only 1 point is separating the two Frenchmen and with the Pyrenees yet to come this battle is far from over.

The long stage produced a break away as 2004 Olympic road race silver medalist, Sergio Paulinho beat out Vasili Kiryienka for his first Tour stage victory. The French would've loved to see one of their own win on Bastille Day, but the Portuguese rider gave his Radioshack team an unforgettable victory! 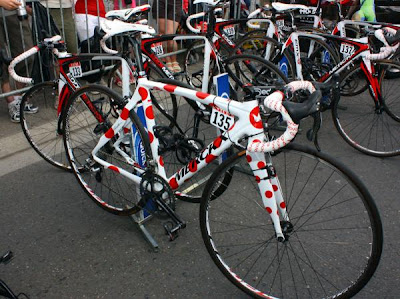