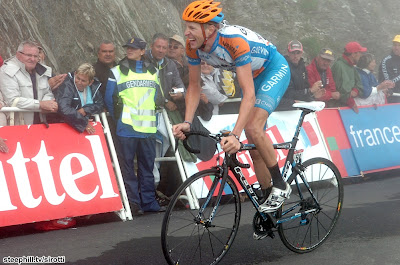 
Yesterday's toughest mountain stage lured the tiring peloton with a fantastic finish on top of the famous Col du Tourmalet. The race was and is between Schleck and Contador and they finished together with Schleck taking the stage win. 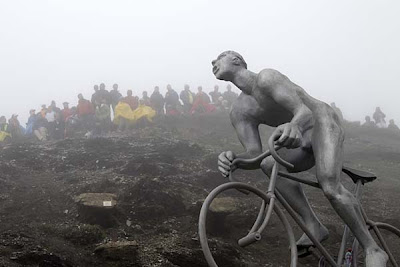 
The last 10 km it was them and only a fight with the two strongest riders in this Tour. They looked comfortable in front of the rest and followed one another separated by a scant 'Lemondesque' 8 seconds. Unfortunately, there's no time bonuses and a sprint was not in the cards.

Behind a battle erupted with key top ten riders', Sanchez, Horner, Hesjedal, Menchov, Gesink Rodriquez, Van Den Broeck and Kreuziger. Sanchez looked fresh after falling earlier in the race. But, Hesjedal looked even more stronger maintaining a consistent rhythm looking like he's having amazing form since taken over as team leader for Garmin.

As the 'gift' was given to Schleck, Rodriquez attacked and finished third with Hesjedal roaring in fourth! Sanchez, the Olympic road race champ, held onto fifth taking precious seconds from Menchov (sixth) for the final podium spot. Another hero was Nicolas Roche clawing his way to 12th moving up to 15th overall beating his nemesis Jean Gradet.

There's no reason denying Hesjedal his rightful top ten finish in his by far best Tour. "I feel like I'm getting stronger, so a few more days and we'll be happy in Paris," he confidently said. 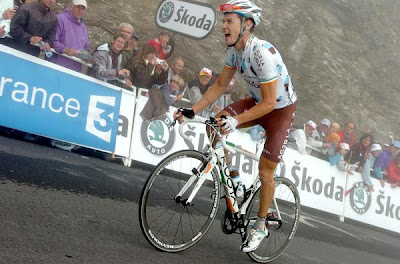 resumedocket said…
When one conceives the issue at hand, i have to agree with your endings. You intelligibly show cognition about this topic and i have much to learn after reading your post.Lot's of greetings and i will come back for any further updates.
Resume Writing Service
July 30, 2010 at 5:30 AM