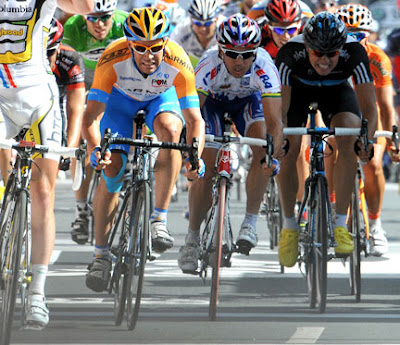 Kiwi flying!
It's not easy to have Mark Cavendish to race against. Julian Dean knows. He's come up to the Manx Missile on today's stage 18's run in to Bordeaux. He actually won ...in second place. Worthy of his role as the sprinter on Garmin since Tyler Farrar abandoned.

Dean said, "I'm happy with today's result. When we opened up the sprint, Cavendish was clearly fastest. Second is good. Of course I'd love to win, as we all would."

On Wednesday's stage 16, while warming up half way up the Col de Peyresourde, Dean was tackled by a policeman. A case of mistaken identity the policeman had thought that Dean was an errant spectator. As the bewildered Dean got back on his bike the cop tried to stop him from riding back down to the team bus.

If that wasn't odd enough, during last year's Tour Dean was shot by someone with an air pellet gun. A week after that Tour doctors found part of the pellet still in his finger.

Tough going, at least it's better than being tackled by a cop for mistaken identity!
sprinters Tour de France