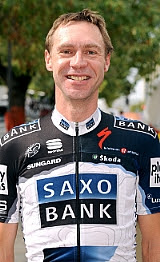 Heroes were made in today's great mountainous stage 9 Morzine-Avoriaz to Saint-Jean-de-Maurienne.

First off is everybody's lovable favorite, Jens Voigt who helped bring up Andy Schleck & Alberto Contador right up to the top of the frightening Col de la Madeleine. It was pure Jens as he probably said to himself, "Shut up legs!" as he drove up the climb almost to the top. He's a hero in my books and pure class gutting it out with his patented pained expression. Just before the top around 100 meters he just shook his head and stopped with no gas in the tank. What a *%^# effort by the 38 year old ...simply courageous!

Thor Hushovd is utterly amazing. He knew that to distant himself further in the green points classification is to go for the intermediate sprints, which he did. He may not be the fastest sprinter but he is smart. At the start, he took off alone dragging a bunch of riders with him. He took the valuable points stood up then went to his position in the back of the pack.

Cadel Evans rode today on a fractured elbow sustained during a crash on stage 8. Heroic can only be described for the suffering leader of a relatively weak BMC team. His team made it quiet before the start of the stage for fear of not giving his rivals reason to attack him. He lost his yellow jersey on the Col de la Madeleine suffering like heroes do losing more than eight minutes in arrears. He sobbed afterwards and said, "The guys and the team have supported me and believed in me in this whole project. I'm so sorry to have let them all down."

The French can revel in Sandy Casar's excellent dash to win this amazing stage. He was part of the strong break that lead over the Col de al Colomiere, Col de Aravis, Col des Saisies & Col de la Madeleine. His group was caught by the chasing duo of Schleck & Contador but he managed to beat out LL Sanchez and Cunego for the sprint.

Hero status also goes to Sammy Sanchez for chasing alone in the final 10km finishing a minute in arrears but earned third place overall. Jerome Pineau reign in polka-dots are over as fellow Frenchman Anthony Charteau takes it over with his gutsy fifth place finish. One other rider rode well, Denis Menchov as quiet and unassuming so far in this exciting Tour, he finished in 13th place moving into fourth overall.

And, Bastille Day is tomorrow, that means the French riders will be hungry for the stage win ... good, more heroes! Loving the Bike said…
It was quite a day today wasn't it? I love the mountain stages and I feel that there was more excitement and amazing stories in today's one stage than there was in the first 6 or 7 combined.
Jens day will go down in history, I'm sure.