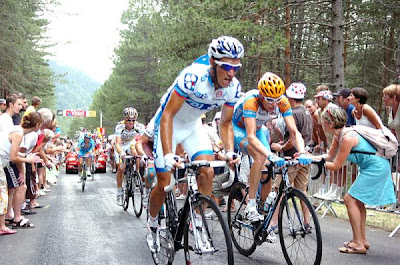 On the Montée Laurent Jalabert...
Rydering with Christophe Le Mevel.
Todays stage 12 was another page turner in the Tour book of Garmin Transitions. An amazing breakaway resulted with eighteen riders that went on the second climb. And Ryder Hesjedal was part of the merry band of bandits.

He looked strong and gave it a go. Ever since taking the leadership role he's had an exceptional Tour. The surviving four of Hesjedal, Vinokourov, Kloden, and Kyrienka approached the foot of the Montée Laurent Jalabert with 3km of very steep climbing ahead.
Hesjedal loss contact and finished 24th, 53 seconds behind Joaquin Rodriguez and Alberto Contador. Brave and bold ride for the Garmin leader hoping for a stage win,  he's now in thirteenth overall. Earlier in today's stage, Tyler Farrar had to abandon. His broken wrist was finally too much to bear. He joins Christian Vandervelde & Robbie Hunter on the sidelines. With a depleted team one could say they don't have much of a chance. I think they do.
Ryder's new nickname is, 'Weight of a Nation.' And there's a t-shirt on sale on the Garmin team page. Meanwhile, the ever confident Canadian said, "I think I showed today I can lead the team. That was probably one of the hardest days so far, but I'm not scared to go hard and leave it out on the road. We've got the hardest days coming up, and we'll see what today did to me, but I'd rather take the chance, and maybe come off with something big, than just follow. This Tour is all about testing the limits for me."
I have a feeling Garmin's Tour plans are far from over!
Ryder Hesjedal Tour de France