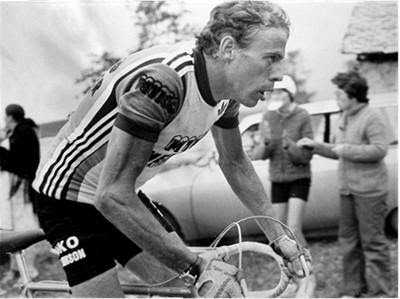 Heroic escape by the Jailer...
Christian Seznec goes solo for 200kms...
Twenty-three year old Bernard Hinault had his mojo going. He was already a classics star winning the 1977 Liege-Bastogne-Liege & Ghent Wevelgem. He proved to be a top time triallist by winning the Grand Prix des Nations. The Criterium du Dauphine Libere was a mountainous one where he crashed on a descent and climbed out from the roadside back on his bike for the victory. Tough as nails. Two months before the 1978 Tour he conquered and won the Vuelta a Espana, excellent prep for Le Tour. Then, just before the Tour he duly won the National Championships and with it the tricolour jersey. The Badger could smell a possible Tour win, so could his ever growing fans. 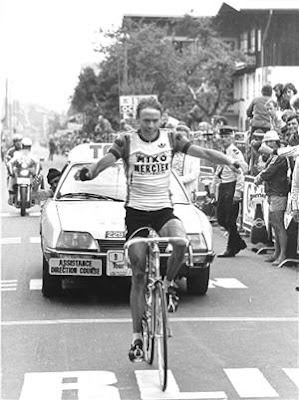 ... to cheerful victory in Morzine!
The TT to Sainte-Foy-la-Grande was won by Hinault. And with this catapulted him to fourth place overall as serious contender. Belgium Joseph Bruyere was second and stepped into the coveted role as the yellow jersey. He looked every bit worthy of his new role as race leader, far from his usual role as one of Merckx's trusted lieutenants. Bruyere was a fine classics rider, could he possibly shoulder the golden fleece to glory? He did, wearing the yellow jersey for the next eight stages.
Meanwhile, Hinault took over the race masterly. On the mountainous stage in the Pyrenees to Saint-Lary-Soulan he led the field up the climb losing just five seconds to grimpeur Mariano Martinez. The Badger barred his teeth and he proved that he could climb with the best specialists. Hinault moved to second overall behind Bruyere. On the Tourmalet, double Tour winner, Bernard Thevenet called it a day and retire. The year before, Thevenet tested positive during Paris-Nice and later admitted taking steroids. Sadly, he faded away and never was a force in the Tour.
Frustration of early starts, numerous transfers and lack of respect by the Tour organizers, the riders dismounted before the finish to Valence-d'Agen. Hinault was clearly in charge, leading the peloton as they walked across the finish line in protest. They were booed by the crowds and Hinault was affected when the town's chief councillor said, "You do not deserve to wear the jersey of champion of France." It only made him stronger.
The race turned into farcical disbelief when Michel Pollentier won the yellow jersey at Alpe-d'Huez. At the post stage dope control, he was caught with a plastic bulb under his arm trying to pass someone else's urine. He was immediately thrown out of the Tour. Joop Zoetemelk inherited the yellow jersey.
One of my favorite riders of that Tour was Christian Seznec nicknamed as, "The Jailer," for his morose like appearance in the peloton. On the long stage to Morzine he escaped alone on the Col de Joux Plane to win, 200kms alone and almost 10 minutes in front of second place finisher Paul Wellens.
On the final TT stage, Hinault beat Zoetemelk by an overwhelming & backbreaking 4 minutes 10 secs taking over as race leader and triumphing in his first Tour. Patron like, Hinault would rule over the wary peloton winning him five Tours! 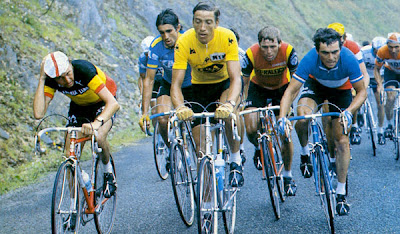