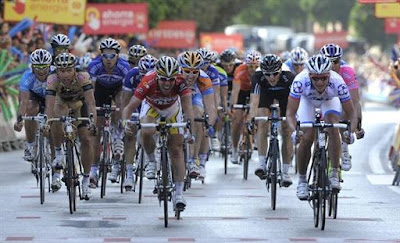 Hutarovich is the new train in da house!

Yauheni Hutarovich, who rides for FDJ came out of nowhere to beat the world's number 1 sprinter, Boy Cavendish in stage 2.

Surprise yes, and not so. Already a stage winner in the Tour of Poland he's made his mark . He prevented the Manx Missile from a first individual Vuelta stage win to equal Robert Millar's three stage wins in all Grand Tours. Of course, it's only a matter of time as there is more sprint stages ahead.

Marc Madiot's refreshing FDJ squad decided not to have the big Belarusian in this years Tour. Only 26 years old. A perfect confidence booster resulting in his first ProTour win. And for the third year pro his wish for Vuelta stage victory is answered in a huge way. As FDJ manager Marc Madiot says, "He's improving constantly. With this win, he enters the circle of the great sprinters."

Unfortunately, for Cavendish & the other sprinters there's now a new threat!
sprinters Vuelta a España