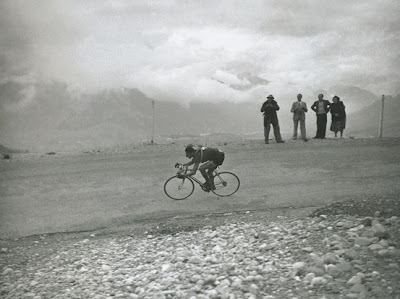 I wish I could be many things, cycling that is: a good climber, sprinter and descender. It's an enjoyable rush after having to heave yourself up a mountain then be rewarded with downhill joy. That's what I love especially after climbing Mount Seymour (1400m, 12.2km) of vertical madness. I believe it took around 5-10 minutes to reach the bottom. Actually, I couldn't tell you the exact time as my eyes were tearing all the way down.

Two of my favorite descenders are Ferdi Kubler & Sean Yates. Both knew the word speed.

Kubler nicknamed "the cowboy" for his love for Stetson hats had an aggressive style of riding. In the 1949 Tour in the Cannes-Briancon mountains stage 16 he gave Coppi & Bartali a scare by attacking on top of the Col de Vars 4 minutes in front of favorites Bartali and Coppi. Kubler raced down the other side like a demon looking like the potential new yellow jersey. But, one more mountain to climb was the Izoard and Kubler had two punctures. Thus the famous image of him waving his pump in frustration. He finished 15 minutes behind the winner Bartali.

Sean Yates was another speedster due to the fact that he couldn't climb. So he punched it on the descent letting his big body and gravity do the work. When he rode for 7-11 he was clocked at about 112 kph down the Col du Tourmalet. At the 1990 Dauphine Libere going upwards to L'Alpe du Huez, Yates found he was losing five minutes but on the descent down to Grenoble he closed that five minute gap back to the leaders on a 15km descent. It was pouring rain and he was doing 100 km. He said, "I went by Sean Kelly so fast like they were standing still. That night he actually went to my bike to see if I had something special on it." 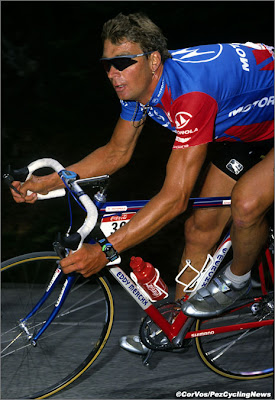 Jason said…
Sammy Sanchez could be classed as a present day Sean Yates in terms of his descending skills as can Cancellara and maybe even Nibali although they are all very different riders to Yates.

Michael said…
I like that little interchange between Yates and Kelly. Says something about Yates' skill, since Kelly was no slouch at descending either.
August 13, 2010 at 9:15 PM

Richard said…
He was a demon going downhill at 112kph, utterly amazing he never wiped out. I would love to see Kelly's reaction checking out his bike!
August 14, 2010 at 7:37 AM