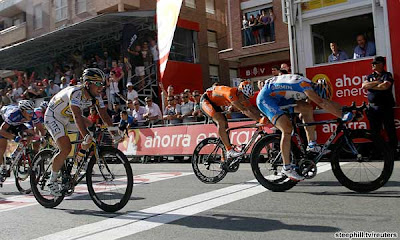 With this week's big news of Garmin-Cervelo to join forces next season, a super team will form. Thor Hushovd is already on board with his Cervelo 'mates joining him; Heinrich Haussler, Andreas Klier, Roger Hammond, Brett Lancaster, Daniel Lloyd & Gabriel Rasch. A 'toast' in the form of a victory would be very appropriate.

Today on stage 5: Guadix to Lorca 199km long stage culminated in the final sprint. Any lingering doubts of Tyler Farrar and his stomach bug was put away nicely with a massive stage win. The Garmin sprinter was ill during yesterday's stage 4 and close to abandon. Lead-out star Julian Dean still injured from a fall before the opening TTT was not in the numbers. So, Farrar used his other two pilot fish namely; Matt Wilson & Michael Kreder to position him with 10 km to go. It worked so well that Farrar blew by Cavendish taking a rare but an important victory. The American is now tied with Igor Anton for the points jersey at 41 points.

And, Farrar is coming back into form and looking dangerous. Rallying back from his disaster in the Tour a turn of events started with a fine win in Hamburg, second in Plouy & today's Vuelta stage. For Thor Hushovd who finished well in the pack his 'toast' could come in tomorrow's short mountainous stage. 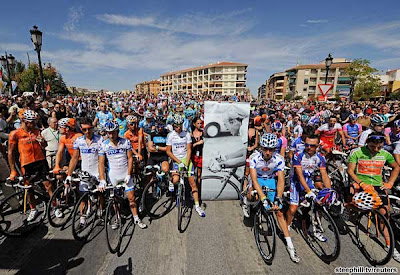 Before the start...
a moment of silence
for Laurent Fignon.
Laurent Fignon sprinters Thor Hushovd Vuelta a España