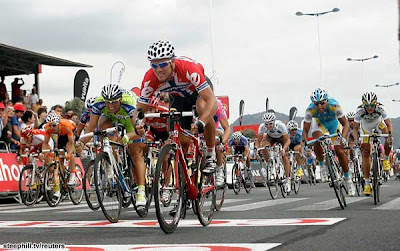 A big win for the Norseman!
Watching the highlights of Thor Hushovd's sprinting ability in stage 6 of the Vuelta made me smile. I need it. I'm at home relaxing after a ride and tangling with a nasty construction hose. I tried to bunny hop it but lost and skidded on my right side. I'm suffering bruises to my elbow, hip, knee, & ribs. With the help of polysporin, ice pack and rest I'll be ok.

The Norwegian is still a force to reckon with. The Cervelo rider scaled the Alto de la Cresta del Gallo leaving behind many sprinters before the final into Murcia. To say that the God of Thunder isn't a pure sprinter but rather evolving into an all rounder capable of both; fast on the flats & climbing is aptly suitable. Hushovd saved his sting for the finish, handily beating out Daniele Bennati & the emerging Grega Bole for victory.

Impressing Garmin boss, Jonathan Vaughters that signing Hushovd was the right decision for next season. On yesterday's stage 5, Garmin's Tyler Farrar let it be known that he's back & sprinted for a splendid victory. One things for sure, both are talented riders and will definitely give the new Garmin-Cervelo partnership a distinct two-pronged edge!
sprinters Thor Hushovd Vuelta a España

Jim said…
Garmin and Cervelo together! Both are favorites of mine (you might have noticed I am especially fond of my Cervelos!), and it looks like a great lineup of riders, too.
September 3, 2010 at 3:57 PM

Looking forward to them laying the 'hammer' down!