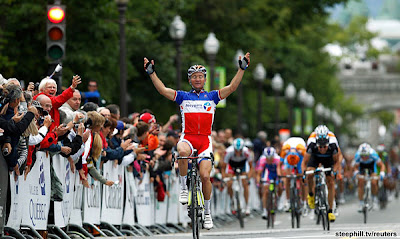 Québec City put on a great show today, to be the first UCI ProTour race in North America. Duly noted with the throngs of fans cheering along the circuit race it was a beautiful atmosphere. Congratulations must go to the city, fans, riders, organizers and especially the UCI for choosing Québec City. It was quite a race. And a memorable one it was as Thomas Voeckler came out of nowhere, ok he was lurking in the peloton, pouncing in the final 800 metres to take the race.
Blasting past Ryder Hesjedal (4th) and Robert Gesink (3rd) the French National Champion managed to look behind him before lifting his arms in surprised victory. The margin seemed enough as he smiled shook his head at nipping out the fast charging freight train of Edvald Boasson Hagen.
But, the BBox man wasn't always smiling as he almost thought of quitting the race. Voeckler said he wasn't in the best form coming into the race. So he had to bide his time going up the last climb. He must've felt good being part of a small group catching the late breakaway of five riders.
Canadian star, Ryder Hesjedal initiated that breakaway like a sly fox attacking with two laps to go, up the steep Cote de la Montagne. A solid group looking like it contained the winner, or so I thought. The riders were very talented; Matti Breschel, Damiano Cunego, Dries Devenyns, Fabian Wagmann & Ryder Hesjedal. In the final kilometres, they were caught so Voeckler launched his attacked for an unforgetful win.
And, Sunday is the GP Montréal... the Québec stage is set for more success!