The Rain in Spain Goes Mainly up the Bola del Mundo 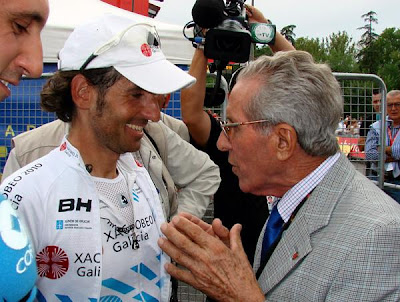 Mosquera receives some 'winning advice' by the great Federico Bahamontes
after stage 19 in Toledo.
cyclingnews.com

This Vuelta is destined to be one of the most exciting, as the lead has see-sawed to great joy by yours truly. The final battle with the eventual winner will be exposed Saturday up the 2247m Bola del Mundo (ball of the world) summit.

Fifty seconds is separating Vincenzo 'the shark' Nibali over second place climber Ezequiel Mosquera. It hasn't been easy for the young Nibali but on todays run into Toledo he saw a little light at the end of the tunnel. He gained an additional 12 seconds on the Spanish climbing ace and feels confident that it could help him win his first grand tour. If this happens, Nibali will become the fifth Italian rider to win the Vuelta a Espana since Marco Giovannetti back in 1990.

Ever since stage 11, Mosquera launched an incredible attack came in second and positioned himself close in fifth overall. His relentless aggressive attacking pushed him even closer to third overall and becoming a heavy favorite to win. But, he's now on the precipice, 50 seconds seem to be a huge order to fill especially against a hungry shark. His team boss, Alvaro Pino has openly criticised Mosquera's lack of desire to push himself after stage 16. Pino knows a thing or two about being provoked by team bosses and as a result he won the 1986 Vuelta. His wish for Mosquera to win is evident.

And, Saturday's stage is set, as forecasters are predicting rain which would make the climb very dramatic and the outcome ...unpredictable.
Frederico Bahamontes Grimpeurs Vuelta a España