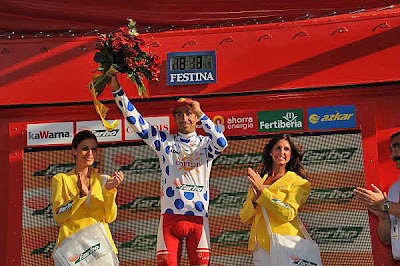 A KOM title beckons.
cyclingnews.com
For Frenchman, David Moncoutié has moved into a familiar position atop the Mountains Classification in the Vuelta a España. 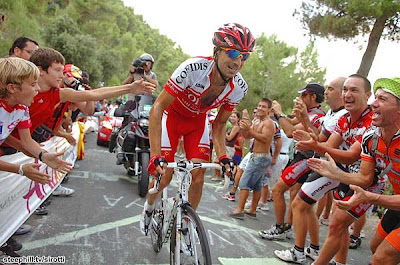 Going to a Stage 8 high!
After seizing a decisive victory on Saturday's stage 8 climb up the Alto Zorret del Cati, Moncoutié is settling into a steady rhythm for his ultimate target... a third Mountain's Classification.
Climbing success started early. His first victory was a mountain stage in the 1999 Critérium du Dauphiné Libéré. Stage win in the 2004 Tour then 1st Mountains Classification in the 2006 Paris-Nice. The Spanish mountains seem to suit his attacking style. In the 2008 Vuelta, stage 8 & Mountains Classification winner. Followed in the 2009 Vuelta, stage 13 & a second Mountains Classification win.
On Sunday, the menace of seven climbs along with the searing heat played into the hands of the ever ambitious Moncoutié. But, Gonzalo Rabunal (Xacobeo Galicia) had something else to say in the way of attacking for KOM points. The Xacobeo rider was doing an excellent job in protecting the KOM lead of his teammate Serafin Martinez. The see-saw battle ended as the Frenchman escaped with a small group containing; David Lopez, Roman Kreuziger & Giampaolo Caruso.

David Lopez took a fine stage victory as Moncoutié finished fourth amassing enough points to become the new KOM's leader. The heat in the mountains has just begun and it's looking like David Moncoutié is in the lofty position wearing those nice blue polka-dots! 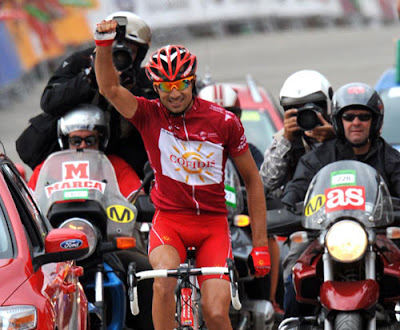