A Sunday in Hell: Revisited 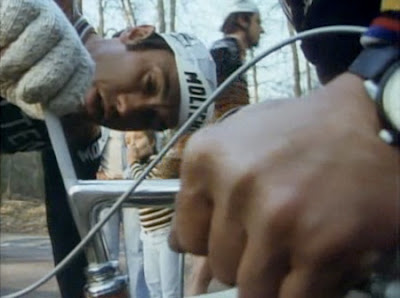 "That's Bernard Thévenet, still France's greatest hero after his triumph in the 1975 Tour de France. He doesn't have much of a chance in Paris-Roubaix because he's not good enough... on le pavé." 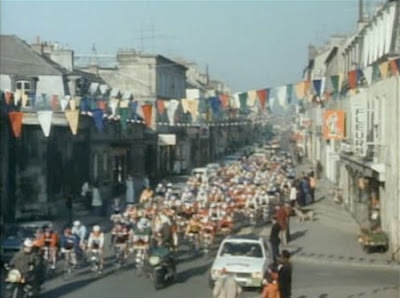 I've re-watched A Sunday in Hell: 1976 Paris-Roubaix (directed by Jorgen Leth) countless of times always assured of the ultimate pleasure of viewing one of the finest cycling films ever made. I think it's certainly all about inspiration and a little hero worship, too. It's especially desirable right after a ride, like today, as I found a brief lull in the rain and went off for two hours.

So many stars of that era that had a chance to win; Freddy Maertens, Eddy Merckx, Roger DeVlaeminck, Francesco Moser, Walter Planckaert, Hennie Kuiper, Walter Godefroot... But, there was a whole bunch of riders that had little if no chance in Hell. Two French heroes; Bernard Thévenet & 40 year old Raymond Poulidor were two unlikely riders to conquer le pavé. I love watching supporting rider, Marc Demeyer, taking advantage as team leader Maertens was force to quit after a fall. He surprised everyone to win it! 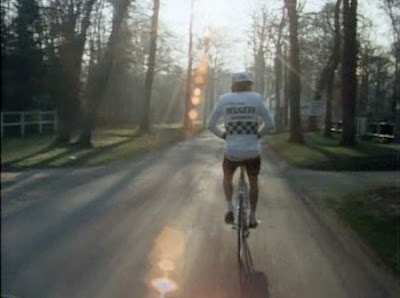 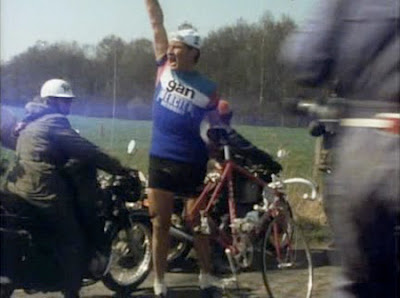 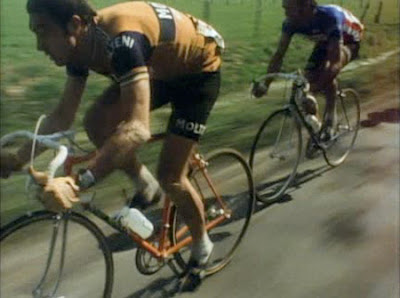 Ian said…
Brilliant film. Haven't watched it for years as my copy is video and I no longer have a player. Strange coincidence - my dad phoned 2 nights ago and said he's copied it (along with 'Stars and Water-carriers') over to a DVD for me :)
September 19, 2010 at 2:51 AM

Richard said…
Good stuff, now you'll have two classic ones to watch over and over again. I'll give a 'short' while before I see it again!
September 19, 2010 at 9:02 AM

Jim said…
Funny you should post this now. I just finished watching it again just last night!
September 21, 2010 at 6:41 AM

XXC Magazine said…
What a classic film. The scene with Merckx adjusting his saddle even got on my nerves! I can imagine what his mechanics though! LOL!
September 21, 2010 at 1:05 PM

Richard said…
Especially asking for a spanner from the Brooklyn team car, he was the king!
September 21, 2010 at 1:46 PM

William Foreman said…
Indeed, it's a classic. The Waffles & Steel blog (www.wafflesandsteel.com) has a weekly series that deconstructs the film. Check it out.
November 15, 2010 at 11:56 AM