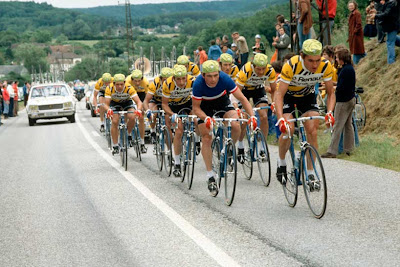 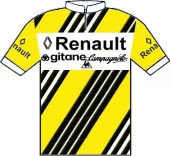 When Laurent Fignon first signed for Renault, he said that the team was part of the flesh and blood of French life. To me, it captivated and awe inspired me. Renault would always present, to me, the Badger’s & Fignon’s winning ways with Guimard at the helm. The Renault ship was guided well with great riders that most often won. The iconic French team prospered changing names twice; Renault-Gitane (1978-80) & Renault-Elf (1981-85).

In 1978, the team also introduced their new jersey. Journalist’s touted the new design, the wasp-liked jerseys, as eye catching. Their winning ways was certainly an intimidating fear in the peloton. Although Hinault's wasp swarm didn't win the TTT to Caen (finishing in fifth), he won three stages, wore the yellow jersey for three days & importantly claimed his first Tour. The 'sting' was on!
Bernard Hinault favorite jersey's Laurent Fignon Vintage Tour de France